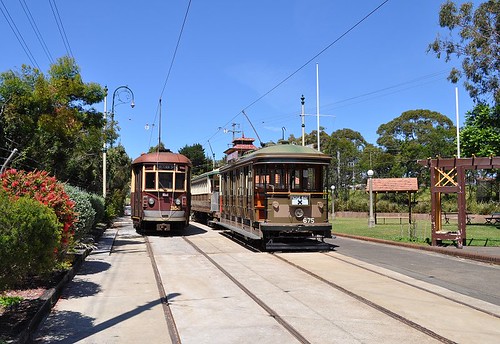 I love a tram ride and have paid many visit to the National TramwayMuseum in the UK, so when I spotted a leaflet for the Australian version, it quickly went on my list “to do”.


Access, from Sydney, is via a train to Loftus on the Illawarra line. Even on a Sunday, these are frequent and formed of the same comfortable double-deck rolling stock operated during the week. I was surprised that behind me sat a couple from England. What are the chance of the Pomms congregating without realising it? As it was I stayed quiet or they might have asked me to join their conversation about suntan lotion and I might have suggested that factor 20 wasn't really man enough for the Aussie sun, even the factor 30 they were considering jumping up to is still 20 short of where you need to be. 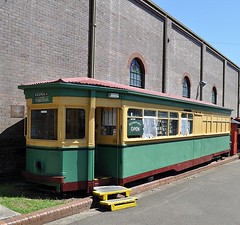 The museum is a couple of minutes stroll from the station and on entry you are directed to a grounded tram body to buy your all-day ticket. Along the way there is plenty of tram-related infrastructure to look at including a signal box which hints that the interurban nature of the systems, rather different to the UK.
Beginning in the late 1950s, the museum used to occupy a shed part way along it's current route. This used to be a military railway until this was taken out of use and passed over for tramway purposes. The Loftus site now boasts a small park and large display hall as well as the maintenance sheds.


Operations start at Loftus and the first tram of the day ran to Sutherland, a trip of less then 5 minutes that ends up beside an Army depot. I understand the plan is to run on from here but at present the line needs a lot of work.


In the other direction, the main trip is out, over a major road, to the rangers station in the Royal National Park. If I'm honest, this is a bit of a disappointment as the station is an old railway platform with tubular steel canopy left over from the military days. It sits in a clearing of thick gum trees which hide any sort of view. Apparently there is good hiking to be had but everyone on my trip just got off, took a few pictures an climbed back on again.


The main attraction is simply riding the cars. All have been nicely restored and originate from different cities. During my visit, three were in operation, one from Sydney, Adelaide and Melbourne. The later was described as having the best air conditioning in the world as it was without windows!
Many more trams can be found in the museum hall where the main fleet lives. The walls have a history of Sydney tramways and some memorabilia. Again, cars come from all over the country.


I was particularly taken by the prison transfer car complete with lockable cells inside and signs on the front saying “No Passengers”. Strictly speaking, there were, but not paying ones! This car saw an audacious escape during its life when a prisoner cut his way through the wooden roof and made off. As this was a one-off, presumably the repairs were a bit stronger. 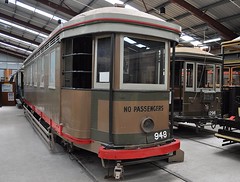 While not as large as the UK version, over 100 cars are apparently on site and most in pretty good condition. Access is excellent as you can wander around at will and each tram has a small explanatory panel for people like me who want to get anoraky. Restoration work can be seen at the back of the sheds too although this is a cordoned off so we don't get in the way or hurt ourselves.


Outside, the operation is pleasantly home-spun. The aforementioned grounded body s home to the ticket seller and souvenir shop. I enjoyed a long chat with the proprietor, interrupted only when he had to announce the next tram running over the tanoy.


Food comes from a shed and is of the crisps and sausage roll variety although ice cream is offered and was ideal for the baking hot day I enjoyed.


I'd certainly recommend a trip to the museum. Even the kids who you might think had been dragged along by grandparents seemed to be enjoying themselves. It appears that simply riding on a wooden tramcar can compete with modern attractions.
Visit the Sydney Tramway Museum website 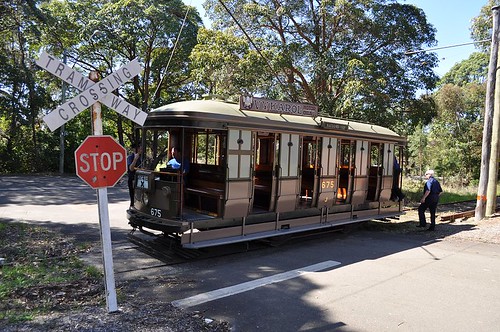