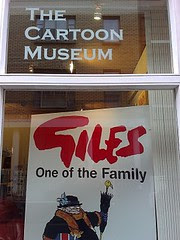 I grew up with Giles cartoons. Every Christmas the Giles annual would arrive via Santa for my Father and would be quickly passed around the family with each of us taking time to work our way through the pages enjoying the humorous contents. The books were, and still are, collected together in pride of place on the bookshelf in our baronial library. As long as I can remember we've had a nearly complete set missing only a few of the earliest copies. Special editions, Guiness and RNLI stuff and a couple of jigsaws also form part of the collection. For a long while the Daily Express was delivered primarily for its cartoon (they also syndicated Garfield) content. Good job too as it was, and remains, a terrible useless newspaper that seems to gather copy from an infinite number of monkeys having a crack at Shakespeare. Even their most famous cartoonist didn't like them much often killing off one of thier other "stars", Rupert Bear, in the background of his scenes.

I digress. It is possible that some of my readers have been unlucky enough not to be exposed to a Giles cartoon and don't know what I'm going on about. If that is you then I suggest you first head off to Wikipedia for a brief and unusually accurate history or possible the British Cartoon Archive for those with longer attention spans. Then visit Giles Cartoons - A celebration and keep pressing F5 for new pictures.

The cartoons as I knew them normally featured the Giles family. Giles didn't actually have a family of his own but invented possibly one of the best known in the country. Pride of place goes to Grandma, a vision in heavy black coats and hat over a black dress. Permanently scowling she glares out from the Cartoon Museum window. This is my second trip to the museum, dig back in the blog for my first visit and more details on the place itself. This time I was to see an artist whose work I knew and loved.

It's strange but despite all those years of enjoying Giles work, I knew next to nothing about the man himself. Fortunately the exhibition has changed this. .The display, which fills the ground floor, takes the visitor through his life. Lots of original artwork is on display along with personal documents such as wartime identity and NUJ cards. Without sounding pretentious (moi ?) this does help me to understand the cartoons. For example before becoming a cartoonist Giles filled in frames in cartoon films - literally drawing the transitions between key frames created by the main artist. This shows later as the pictures are often a moment in time, you can imaging what has happened in the run up to the scene and what will happen afterwards. I'd not though of this before but can see it now.

Discovering that there was such a thing as a War Cartoonist was a revelation too. Giles was sent out by the Express and visited the Breendonck and Belson concentration camps. The paper wanted him to send them drawings but he refused, unable to cartoon the horrors he witnessed. Only photographs could show the truth of the camps he argued. Even towards the end of his life he said "There is not a day when I do not remember Belson.". That panel is the most moving of the exhibition and provides a counterpoint for the rest of the hilarity. 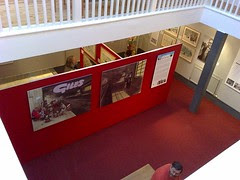 So important were the Giles family that the history of the man and the family become intertwined. Understandable as people will want to know about the development of the characters and trace thier development over time. This isn't unfair as in many was the fictional family were Giles, or at least parts of the man and his past.

Aside from the pictures, there is a recreation of Giles studio with lots of objects he owned and used to help with the pictures providing clutter. Some short films he was responsible for, including a slightly surreal one about the life of a hand grenade, are presented albeit without enough sound for my liking.

My favourite item was the original painting for the 34th Annual in 1980. It's a masterpiece. The workmanship is exquisite. Better still, seeing it in the flesh and perhaps studying it in more detail than I would have done on the cover, you see so much more. OK the picture is a bigger but even so. Another surprise joy is an undated drawing of trams in London. It's not funny and very impressionistic in style but encapsulates the feel of the scene. If only it were available as a poster or postcard !

This exhibition is a joy. Whether you look at it from a social history perspective (the cartoons document and comment on current events over a long period and can often only be understood if you know the history) or just as a chance to see again wonderful humorous pictures it's worth a visit.

Final handy hint - the green painted cafe at the end of the road (opposite the pub) on the corner near the museum is excellent. Top quality food at a reasonable price. I reckon I could have enjoyed sampling at least 10 of the cakes on display !
Posted by Phil Parker at 12:07 No comments: 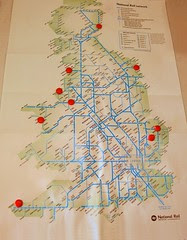 Third: Marking the UK towns with red sugar coated bean shaped confectionery gave me an idea of the size of the problem. Those in the north west can be grouped together and possibly covered with a travelcard and B&B. Norfolk and Suffolk likewise. In the later the station on the poster is closed so I fancy Bury St Edmunds as a nearby replacement. Norfolk broads is pretty vague too so anywhere in the area with a puddle will do me. Finally St Ives is in Cornwall - two months in one go !
Posted by Phil Parker at 07:54 No comments: 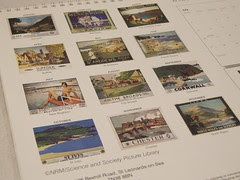 In April, which seems an obscenely long time ago, I started writing this blog with the intention of documenting my travels in the time I had taken off work. As you can tell from the derisory number of postings this plan didn't work out too well and I've not been nearly as far as I dreamed I would be going. In fact most people could manage to get about more in a standard holiday allowance from work than I've managed to do in 8 months free of responsibility.

The immediate excuses that come to mind involve a combination of the UK economy going belly up, petrol prices rising faster than house prices a couple of years ago and my poorly camper van (It's better now, thanks for asking). These are fair but to be honest, rubbish. Truth is that I have discovered I like having travelled much more than the act itself. And the thing I hate more is getting stuck in to the minutiae of planning a trip. Some people can head off without a care in the world and enjoy the fun of dealing with problems, such as not having a bed for the night, as they arise. Sadly, I'm not one of them.

Which all adds up to a pretty quiet blog. And that is embarrassing. So embarrassing that I have been pondering making this post the last one. A big "The End" would finish up the column and the web pages would sit unloved on-line as a memorial to a stupid dream. People would still trip over them, probably searching for "Jurby Junk" on Google, but there would be nothing new to read.

The trouble with this is twofold:
Some people have been whining about the lack of updates (you know who you are...) and so knocking this on the head would be tantamount to admitting complete defeat and accepting that there isn't much more point in leaving the front door.
Also the campervan is running OK at the moment (touches wood and crosses fingers). If the weather warms up a bit it might actually see some action.

So, I need to look at my limits a bit and try and work out how to "travel" on my terms. The trip I've enjoyed most this year was the run to Thurso. Now, I went there because I saw the place on a map and that created the urge to go. So all I need to to identify some places on maps and persuade myself I want to go.

This leads me to my 2009 challenge. Every year I get a calendar. No surprise there - lots of people do. My calendar is better than yours though, it's a National Railway Museum one showing vintage advertising posters for towns around the UK. These are great as while the UK railway system hasn't always been great at actually running trains, the marketing departments have often snapped up some of the greatest artists in the country to design the posters. Most present impossibly attractive views of the subject where the days are always sunny and the people smile all day. Every year I hang this on my wall and every year I wonder about trying to visit all the locations.

This year I'm going to do it.

I'll try and do these by train and tick them off as I go. Next stop a map to work out where to go. In the meantime, visit the NRM website to see more posters, just so you understand what I'm talking about.