The last train to Wrexham

I had my Wednesday all planned out. Mostly it involved getting things ready for a trip at the weekend. Then on the local news came the story that made me change my plans.

Wrexham and Shropshire Railway is to close on Friday.

Friday ?! That was only a couple of days away !

My panic wasn't down to some trainspottery sadness at the loss of a railway company. It was because I had always promised myself a trip to Wrexham on one of these trains. I've used them a few times and have always been hugely impressed, not just by the comfort but by the superb staff. So far my journeys had been restricted to Cosford and a return from Wolverhampton (you might argue that any journey out of Wolverhampton would be pleasant but that would be rude. And incur the wrath of the Black Country), neither of which are long runs. Using these trains is a pleasure to be wallowed in. Michael Williams wrote about his trip down to London using them in the excellent book "The Slow Train" and feels the same way. This is old-fashioned rail travel in the best meaning of the phrase.

To be honest I've never had a particular desire to go to Wrexham other than to enjoy watching the countryside roll by while sitting in comfort. Which is why I dropped my plans and grabbed the 10:54 from Leamington to Wrexham.

W&S are what is called an "Open Access" operator which means they are an independent company that have to negotiate the rights to stop at certain stations, use odd routes and generally have to fit in between everyone else. They tried to differentiate themselves by the quality of the experience and the reasonable price of the tickets. 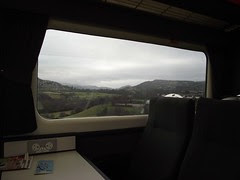 The train arrived at Leamington looking very clean and smart. My coach had recently been fitted out with dark grey curtains and seat covers. Even though the end wall proclaimed "Standard Class", it was on a par with the first class on most other services.

My idea of a good train journey involves a good book, some music, something nice in the way of a cakey bun to eat and a drink of some sort, usually diet coke or hot chocolate. In the coach next to mine was the small buffet counter. But it was unmanned.

You might think this wasn't a surprise. After all, 12 hour earlier the staff had been told they were losing their jobs and with a company less than two years old there wasn't going to be any nice redundancy package to ease the pain. I can fully understand why you just wouldn't bother.

As it was our excellent train manager, Jane Meredith, did the honours. Despite sounding a bit chocked a few times as she talked to us on the tanoy or in person, she provided a very professional service. I recognised her from the Cosford trip and remembered how impressed I'd been with the way she'd handled a group of kids with not enough supervisory grown-ups too.

In the absence of buffet staff, Jane dished up drinks and food for the few passengers on board. The service is mainly about getting people to London in the morning and back in the evening. The traffic into Wales isn't huge, especially in January. All food and drink was free so I enjoyed a very nice fruit scone and jam along with some chocolate to drink. To be honest I'd planned to buy this anyway but I suppose there isn't any point in messing around with change by this point. 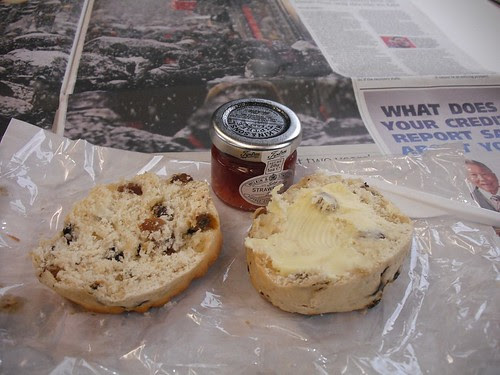 Jane made an announcement about the closure of the service as we passed through Coventry (W&S don't have the rights to stop there which hasn't helped the finances I suspect) and the lady next to me was not impressed. She was a regular user of the service from Gobowen to Banbury and was really going to miss it. Her daughter seemed more interested in the raggy toy but will undoubtedly wonder why she doesn't get a nice comfy train in future and has to walk across Birmingham instead.

Another passenger seemed more interested in what was going to happen to the sets, that is the trains themselves. For once I was really ashamed to be interested, however lightly, in railways. I mean, here we have someone who's just been told she is losing her job and her job and all this idiot wanted to know about was what would happen to the train. He was lucky not to have been told exactly where he could have put it !

The journey itself was a pleasure. We wiggled around the edges of Birmingham which made for a far more interesting view then if the train had charged through New Street, another station closed to the company. For the non-anorak I have to point out that the company uses proper coaches pulled by an engine rather than the more common version where each vehicle has an engine under the floor. This give a better ride and the surroundings are quieter. You can hear the gentle clickety-clack as you cross rail joints and the odd soft toot from the engine horn at the front. These coaches are over 25 years old of course but that's progress for you. If I have a complaint, it's that the fixed arms make sliding your legs out from under the table a bit tricky but I can live with that for the roomy seats. 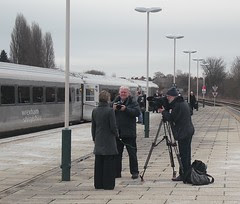 As we approached Wales it was apparent that I wasn't the only one interested in the demise of these fine grey trains. At both Ruabon and Gobowen there were people on the platforms with cameras. Once we reached our destination and crunched our way up a salt-covered platform, even the BBC had turned up to film our arrival. Some local radio person stuffed a microphone in my face and asked my opinion on the ending of the service. I said something along the lines of it being a shame a quality service can't survive in Britain any more and this was a terrible shame. Not that it mattered - there are already some half-hearted attempts to save it, the local MP is jumping on the bandwagon rather faster than he jumped on the train apparently, but it's no good. In future you'll have to do what I did on the way back and change at Birmingham or Smethick. The "sets" will doubtless be packed off to a siding somewhere and left to rot while everyone carries on with noisy and uncomfortable trains, because it's what we do nowadays.

Along with several other passengers, I wished Jane good luck in the future. She disappeared through a door into a room in which it could be glimpsed, was fullof other W&S staff in the same boat. I hope they are lucky in the future. They deserve it.

More photos on Flickr.
Posted by Phil Parker at 10:23 No comments: