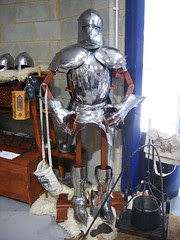 As many people have pointed out, all towns look the same. You wander the high street and see the same shops, or at least boarded up premises that you see in every other town. To travel isn't to expand your mind, it's just to find a branch of Next that you've not seen before. Anyone wanting to get properly off the beaten track increasingly has to fly half way around the planet and find themselves somewhere with no roads or mains sanitation. Even then there will be a McDonalds and Starbucks.

Perhaps in this globally connected world we need to form a new paradigm to describe the travel experience. Instead of visiting a place, we should visit a community. And since we aren't constrained by geography any more then these can be spread across the planet. A personal example: I belong to the Type2.com mailing list, a real community where we chat and help each other with our shared interest in aged VW vans. I know some of these people better than I know many of those who live in my street.

In practical terms this means that simply changing geography isn't enough. Ever since the first printing press stopped knocking out bibles and started on newspapers we have formed links beyond out immediate area. In modern terms, social networking web sites means that where ever we are physically located there is a good chance that we will still know someone. Years ago marrying outside your village was unusual. Now you are likely to work in a different county to your home and think nothing of travelling 50 miles twice a day to do this. To put this into context, the Isle of Man had a railway system even though it's only 30 miles long. And there were lots of stations en route serving local communities whose lives were revolutionised this way. 30 miles is a trip to the shops nowadays.

Anyway, all this pretentious waffle is to say that maybe there is no point going to places any more. Far better to go to communities. Thing is I'm not heading off to live with a tribe in the Amazon, I want something with more clothing you'll be pleased to hear; which is why when I drove past the Warwickshire Exhibition Centre recently, I took note of the banner advertising the Living history re-enactment fair.

I've never felt the urge to live in a tent pretending to be a Saxon or Viking. But lots of people do and so a dip into their world could be interesting. Besides, it's only £3.50 to go in so how much had I got to lose ? I've been in this exhibition hall many times but for the first time I really didn't know what would be in the doors. Not a clue. I suppose I hoped to see people making swords and stuff but as I know little of the subject it was a mystery.

First impressions were - wow, what a lot of people. And clothes, lots of clothes. And lots of the people are wearing the weird clothes. And look there is a man making a longbow. He appears to run a bow and arrow stall. And that looks like a nice suit of armour. With accessories. Nice. Oh, shiny things. Shiny things that could kill someone. 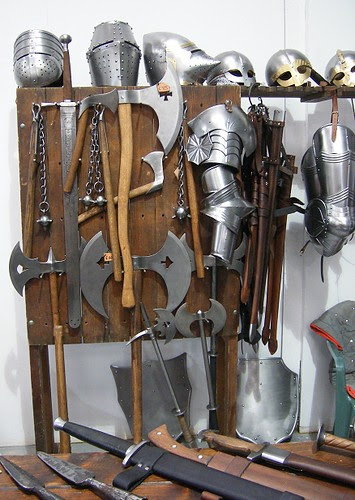 Actually that pretty much sums up my experience. To find a modern parallel, image an indoor market but with all the stalls selling second hand clothes being purveyors of (new) Victorian and earlier apparel. The mobile 'phone stalls (as an aside, am I the last person in the world to prefer an apostrophe before the word 'phone ?) are no more but in their place you can buy bows and arrows. Drapery stalls still exist of course but the cloth is much coarser and looks like it would be as itchy as the jumper your granny knits for your Christmas present. Of course you can buy shoes but these are rather more leather than normal, with quite a high wood content too, especially in the clogs. No slightly icky underwear sellers of course but some serious corsetry in both whalebone and leather (diet, nah just do the laces up tighter and give me more cake...). And those dodgy guys selling "collectable" knives to sad acts ? They are selling various swords and battle axes...

It was fantastic. I still have no desire to live in a suitably period tent or to run around fields attacking people but the hardware fascinates me. OK so I've always enjoyed making things so watching a guy dressed in a medieval smock carving away at a lump of wood is my sort of thing (the carving, not the smock obviously). The craftsmanship is truly amazing too. Knowing a little about metal forming I marvel at how a flat piece of steel can be turned into armour without any evidence of the required hammering. Even the weapons are things of beauty - and very blunt in case you were wondering. In fact if your recreation requires a lot of hitting people with swords then hard foam ones were available so that mock battlefields aren't strewn with real casualties.

Probably the biggest surprise was the amount of Victorian attire on sale. Who exactly is dressing up in the stuff and when ? I'm pretty certain there isn't a big scene recreating workhouses and sadly no one sends children up chimneys as entertainment now. Not that there 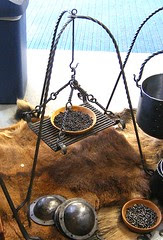 were many urchin tailors anyway. The styles preferred were landed gentry or perhaps a beadle for those in charge of dishing out punishment.

Of course those manning the stands were especially friendly - they really care about and love what they do. You can't be a blacksmith specialising in creating authentic cooking equipment and not enjoy it I suppose. While all jobs have their dull days, being able to hit bits of metal hard at least allows for some stress relief ! My dumb questions were answered and at no point was I made to feel like an idiot outsider.

OK, so I'm not Bruce Parry but at least I went and had a look. And I think I might go back to have another. Once I've carved the horn I bought anyway. Never worked in horn, I wonder what I can make with it ?