Ah, the joys of the English village. Where better to while away spring evenings with delightful, locally brewed, warm beer* beside the duck pond whilst morris dancers whack each other with sticks in a traditional manner ?

In theory, this is just what Long Itchington beer festival promises, apart from the men in bells. The website takes a bit of a dig at nearby Harbury's festival by trumpeting the fact that the festival is spread over 6 pubs rather than the village hall. That way you get to sample the ambiance of the area rather than just one anonymous building, or at least that's the theory. In other words, you can have a drink and see our waterfowl, not be stuck in a municipal building albeit one with alcoholic beverages.

Pub One: The Duck on the Pond.
Nice pub with but with pretensions top be a restaurant, the drinking space is seriously filled with tables, chairs and diners (the pub gets good food reviews in at least one guide to my knowledge). Annoyingly, that drinking space there is in the bar was filled with a circle of friends who hadn't cottoned on that they were taking up all the space where people wish to order and were oblivious to anyone else so didn't move down the bar.

The festival glass is a couple of quid and the beer that fills it eats the rest of the fiver. My mate also buys a glass and then orders beer – which the barman pours into a different, ordinary glass. “I thought you would want to keep this one as a souvenir” he says when the faus pas is pointed out, but then pours the beer from one to another after it's explained that the souvenir would be even better if it had been christened.

With no space inside, thanks to the aforementioned bar hoggers, we move outside to the er, car park. While the village pond, complete with baby ducklings, swans and other wildlife, can be seen from the pub doorway, it is separated from it by a tarmac car park which is home to a collection of exceedingly clean four wheel drives and executive saloons. To make things a little more hospitable tables are set out at the pub end with umbrellas. Nice touch but it's still a car park. The beer's not bad though. 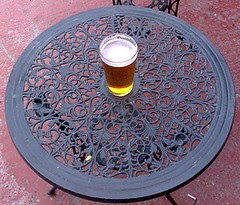 Pub Two: The Harvester.
The plan was to drink a pint in each pub before catching the last bus home. Strolling past the pond we headed for what will soon be known as pub three. It looked a bit busy so we aimed around the corner for The Harvester. To be honest, as none of us knew Long Itchington we just followed people who looked like they were heading for beer. Clutching a pint pot is both a giveaway and helpful sign for those who “Bain't be from round 'ere” and don't know where all the pubs are.

Despite it's name this isn't a chain pub, more your traditional working man's village local. Again, food seemed to be the thing that kept the place afloat and the warren of interconnecting rooms were again full of tables and chairs. Decor was in the manner of a seaside bed & breakfast in a lower class resort so I'd suspect this is where the locals ate or those for whom price mattered more than presentation. The bar staff didn't have to wear corporate clothing or name badges, just like a proper British pub where if you want to know who someone is, you simply ask them.

The bar was heaving. One group of women were discussing the smell of one of the beers. By chance I ordered the allegedly aromatic one and so a round of sniffing ensured. The consensus was that it (unsurprisingly) smelt of beer. Not having a problem with this I took a sip and it tasted of beer too. The complainants then decided that it must have been a different beer and that one had definitely smelt odd. The barman tried sniffing the others on offer but they also smelt of beer. Scooby Doo not being available to solve the mystery we looked for a space to drink – and it was suggested that it was “nice out back” so out we went.

Into the car park.

And what a car park. For a start there were no cars. Hardly surprising as it turned out – access is through a locked gate under a archway. There was a reasonable sized crowd sitting round a couple of tables beside a pile of aluminium beer kegs. We sat at the other tables under some see through corrugated plastic. This was the legally mandated smoking area – hardly salubrious and probably going to put you off your fag in winter, which I suppose is the point. The view, apart from the crowd and kegs, was uninspiring being a wall and back of a few buildings. According to the fancy brickwork, one of these was built in 1861 but that didn't make it any more interesting. Again, a good pint and a busy little pub.

Pub 3: Buck and Bell
Escaping from the tarmac beer garden another attempt was made to get into the Buck. Crowds outside (the beer garden is a 6ft wide strip next to the road) promised a busy pub and we weren't disappointed. Inside, painted signs on the beams pointed us in the direction of the back bar and inevitably, a restaurant. Reaching the end we queued behind a large group already wearing the official festival T-shirts and ordered the same as they were having. While the beer was good I have a feeling that the attraction was the pretty blonde barmaid who had both the main attributes required in excellent bar staff – looks to bring the punters in and the confidence and personality to put them in their place when required !

The place looked like it had been on the end of a redesign from someone who had seen too many makeover programmes on TV. I think the style is called “Faux Posh”, a modern take on the traditional local. Not too many farm implements nailed to the wall I'm pleased to say but plenty of traditional features that were just a bit mock traditional. Add to this some accessorising straight out of a style magazine (sticks in a vase – why ?) and I bet the place does good business with the “travelling out to a little country pub” crowd. One pair of drinkers could be overhead commiserating with each other on the problems of owning a little place in another country. It seems that the Bergerac region isn't that easy to get to regularly and friends and family don't seem to want to use it as often as they expected so it's over three grand a year just for a couple of weeks. And you can't sell them either, not with the market in the state its in now... 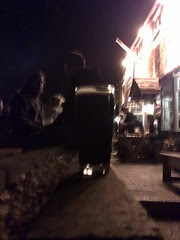 Pub 4: The Two Boats
I like a canal side pub and had spotted this one as we came in on the bus. Now it might be the effect of the beer but the stroll out to it didn't seem as long as expected, little more than five minutes from the centre. We arrived to the sound of a live band, who promptly announced a break in the set. No matter, there were more crowds to struggle through and this is a tiny pub. Two rooms, each with a bar, a few tables and lots of people. Waiting time was around 15 minutes, despite the best efforts of the staff who were hurling beer across the counter as quickly as the pumps could pour it. When we were served the barmaid said this had been the second day of this and, “we've two more to go.”. It's obvious this sort of festival works so you have to wonder why more villages aren't trying it.

Beer in hand it was out to the garden, or towpath as it is more accuratly described. All the tables were full outside, often with people we'd seen in the other pubs. The entire crowd from the Harvester seemed to have made it there, or at least the memorable ones anyway.
For the first time in the evening, the beer wasn't to my taste. It's my own fault, above the bar had been a label saying that it had a licorice taste and like every right minded individual I can't stand the stuff so I ought to have known better. Mind you it still took half a pint to decide this, possible due to the pain killing effects of the previous three !

On the other side of the canal and up a slight hill there was another pub. That was where the band were. A Beatles tribute group, they were set up on some terracing so both groups of drinkers could benefit from the performance – and an excellent one it was too. From the short distance you'd have been forgiven, if you were a bit stupid and knew no pop music history, that you were seeing the real thing. Of course that might have been the beer again.

Chatting in the bar, people said that the other pub was even fuller. Quite where all these people had come from was a mystery as the last bus back home wasn't exactly heaving. Harbury certainly generates more green transport users for its festival. Where ever the source though, there were a lot of people having a good time. The pubs did excellent business so everyone wins.

Next year – I think a visit earlier in the day. Lunchtime perhaps, although it might need several lunchtimes to sample everything on offer. There is also a mystery sixth pub to find as well so it's worth the trip.

*Note for American readers. In Britain, proper beer, often known as bitter, mild or stout, is served luke warm. The only reason beer is served cold is to hide the taste. Our beer tastes nice so we don't need the refrigeration.
Posted by Phil Parker at 01:54 1 comment: