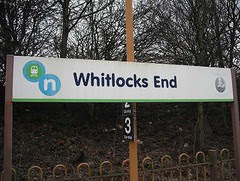 Every time I go to Birmingham on the train, there seems to be a service leaving another platform running to Whitlocks End. This has been going on for months and made me wonder exactly what is so special about the place. After all, if every train seems to be going there, maybe I'm missing something if I don't follow suit !

A quick squiz on Google maps shows it to be a bit isolated. The nearest conurbation is 20 minutes walk away and on the boundaries of Solihull. Not a obvious choice as a desirable destination, but the name has a certain appeal.

The first choice the traveller faces is at the ticket machine. Leamington to Birmingham return costs a substantial £12.50. Leamington to Whitlocks End is £6.30. Same train, same route. Both trips involve going into Brum, it's just the cheaper trip requires you to change trains to reach your destination. If you were minded to do so, you could visit the second city by taking a train to Birmingham New Street and then not bothering with the second stage of the journey thus saving you 6 quid - swivel on that John "I'm going the smash the railways" Major !

Of course, I was a good boy and changed trains at Moor Street station like I was supposed to and found myself returning back down the line the way I had come from ten minutes before heading out along the "Shakespeare Line". The bucolic name hides some grim bits of city although these are quickly replaced by fields largely populated by horses.

Arriving at Whitlocks End station still doesn't explain why trains terminate there. It's a parkway style place. There's lots of space to leave a car, minimal covered facilities, a broken ticket machine and very little else. Certainly nothing to delay the traveller unless he has a skateboard and fancies trying his skills out on the zig-zag ramps provided for wheelchair access. 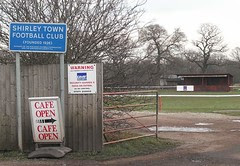 I had taken the precaution of bringing  a map so decided that the nearby town of Dicken's Heath would be worth a stroll. Heading out from the station, the first thing I noticed is that while there aren't many buildings, the area is home to most of the UK's budding football stars. Shirley Town Football club (Founded 1926) have their ground opposite the station entrance and for the weary traveller offer cafe facilities. Around the corner there are Highgate United FC, Monkspath Pumas, Leafield Athletic Football club and Wychall Wanderers Junior FC. Can there be a greater concentration of dribbling talent anywhere in the UK ? More than in the current England team I suspect.

My visit was on a frosty Tuesday so the footballers were at work or school I assume, certainly the fields were empty. Once past them though, I came across the greatest surprise of the day - an elephant. Pachyderms aren't native to this part of the West Midlands. Neither are gorillas, gazelle or crocodiles, but that were all found on the country lane. Specifically at a garden centre called Akamba which specialises in hardy tropical plants (good to -12 degrees C) and full-sized metal animals sculpted in metal. The elephant was around 8 feet high - slightly difficult to load into the car but a bit different from the more common garden gnomes other people have.

Another 5 minutes stroll brought me to the edge of Dicken's Heath. The first few buildings look to have some age but only the first few. Almost instantly you are in to modern housing estate territory. The whole place appears to have been built in the last 5 years but in the manner of a modern take on the traditional village. Someone even thought to construct a barn conversion that I doubt ever saw any hay. A village green abuts the village hall, library and health centre. There is a reasonable shopping arcade. Food comes courtesy of Tesco Metro.

Apart from there there are two cosmetic dentists, one promoting a "Winter whitening" offer because gleaming gnashers are so important over the festive period. You can also get your hair styled by one of at least three hairdressers, buy a property from one of several estate agents and then drown your sorrow at the bill with one of the two wine importers. Don't think we are talking off-licence, one made a great play of the quality of the champagne they stocked. At least it won't stain your newly gleaming teeth. 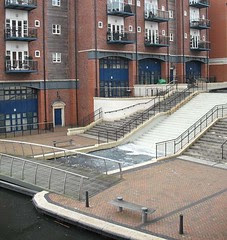 There is a waterfront area complete with a customs house. The water turns out to be a sculpture in a square pool that looked ideal for sailing model boats. This flows down a stepped waterfall about 15 feet to the canal. Around all this were the sort of loft style apartments that have taken over any traditional warehouse found near real quaysides.

The customs officers, by the way, now seem to specialise in selling art.

Sitting in the Cloud Cafe, I pondered the place. For the life of me I can't work out whether I like it or not. On one hand it is a very practical "village". There is a lot of living space nicely arranged near to the shops and with a decent play area for kids too young to head off to the many footie clubs. All the basic facilities are there: library (afternoons only), parish council office, supermarket, plastic pub, or at least a bar and village hall. A limited bus service runs to Solihull and as I discovered, the station isn't too far to walk.

But there was something about it that unnerved me and finally I worked out what it was. Inspiration came from the special of the day - Chorizo Red Pepper, Butter Bean and Spinach Salad. That's not real food, it's the sort of perfect lunch that you think you would like to eat but instead opt for a turkey sandwich, a bag of crisps and bottle of fizzy drink. I'm sure it would be lovely, my carrot cake certainly was, but it's like real life is somewhere else, outside the bubble that the village exists in.

It put me in mind of Portmeirion, the village in Wales where they filmed "The Prisoner". Someone has collected a lot of random architecture together and put it in one place. The buildings are "nice" and certainly far more varied than any similar modern built place I've been in, but it's all so new and, well, plastic. Give it 10 years and I wonder if they will look as pretty. I hope so. It would be lovely to think that community spirit keeps the streets clean and safe, that the recession ends and all the shop units fill up with useful places to buy stuff rather than gift shops and those selling decorating items like Walnut and Weave. 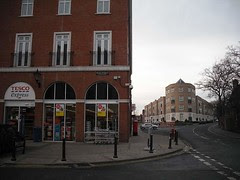 I'm not hopeful. On leaving the cafe I wandered off without the soundtrack provided by my iPod. Suddenly I realised that there was no noise. None at all. This was due to the complete absence of people on the streets. In fact the largest group I'd seen all morning were some young mums in the coffee shop, and they looked like they were devoting a serious chunk of day to this. Apart from those running the shops, the place was deserted.

All the occupants were either abducted by aliens, or had taken the family 4X4 to the station and parked it in the generous parking. At least by the time I got back there, someone was fixing the ticket machine.

More photos on Flickr
Posted by Phil Parker at 12:21 No comments: