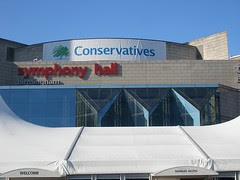 "You went to the Conservative Party conference ?"

I can hear the surprised cries of those who know me. As a bit of a lefty I'm hardly likely to be a fan of David Cameron and his happy gang. Since we've all seen reports on the news of the various party conferences I wondered what they were really like. Can you just pitch up and watch the speeches ? Do famous politicians swan around among the serfs ? Would I be able to punch John Major for screwing up the countries railway system and making trips between Leamington & Birmingham standing room only ?

With the Tories infesting Birmingham this year rather than the seaside it seemed a good day to find out.

The morning dawned bright and sunny. Weather forecasters predicted that this would be the same all day followed by rain of biblical proportions to follow through the week. Fortunately for my temper and the future of Mr Majors nose, the train was quiet enough for everyone to sit down. All that is, except the emo kid who decided to stand on his own at the end of the coach for angst and misery reasons. I bet he was really disapointed it even ran reasonably to time. No, hold on, being disapointed would make him happy. And that would make him sad. I dunno. He stood in the vestibule looking at his iPod miserably anyway when there were empty seats.

Things started to go wrong at New Street Station. The forces of oppression (TM) were obviously aware of my plans and started to harass me on arrival in the city. Testing a newly acquired 2nd hand camera by taking an nice arty shot of the railway lines disappearing into the tunnel at the end of the platform I was shouted at by a "platform assistant" for ignoring a non-existent sign and standing by a signal and not blocking the view of it. Of course if he'd enunciated rather than communicating in a series of shrieks and squeals I'd have put up a proper argument. As it was a colleague wandered up so rather than face down the gathering force I scarpered quick before they carted me off to some anonymous cellar to be interrogated by Michael Potillo (insert Spanish Inquisition joke). Make no mistake comrades, they were out to get me ! 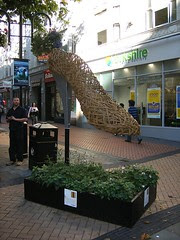 I don't really know what I expected to find in the city centre. Not a giant wicker shoe obviously. Perhaps some protesters as there had been during the G8 summit a few years ago. Or lots of blue flags and banners with pictures of Maggie (out, Out, OUT) and DC as his friends call him apparently. But no. Birmingham was ignoring the Tories as far as I could see. In fact I made it through Victoria Square, past the beach with empty deckchairs (calm down, coastal erosion isn't that bad, it's an advertising thing with sand around a fountain), past the threatened Library building and it's associated McDonalds, past the new Big Issue stand and as nearly to the war memorial before finding a sign of the event. 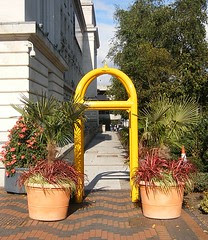 To be honest even when I found the first signs of conference it took me a moment to realise I had made it to the outer ring of steel. At first I thought, "The steel tube flower basket supports are interesting and new. " then looked again and saw the huge metal and concrete elliptical bases they stood in. These were no mere horticultural support, they were designed to repel anyone trying to drive a vehicle onto the plaza. I'm sure they would be very effective at this and keeping fat people out too as the space to walk through wasn't generous. Looking around, every entrance was protected with these fortifications except those off Broad Street which had been closed for the duration.

Approaching the ICC, freshly decorated with banners and coverings, it became obvious that I wasn't going to see any speeches. A huge tent obscured the entrance and out of this stretched queues of smart suited delegates sporting plastic badges around their necks. To get in you had to be checked by uniformed security guards before disappearing under canvas for indoctrination or security checks or something. Had I attempted to try and break in I suspect several of the army of police hanging around would have had something to say. That is if their colleagues on the top of the building hadn't stopped me first. Incidentally, when did the uniform stop being navy blue/black and become fluorescent ? Only the ones with guns get dark colours now - which makes them stand out more as they aren't dressed like builders ! Security was so tight that even the manholes had been sealed with something like black chewing gum to stop the communists using the sewers to invade.

Anyway, with a blue sky and interesting outdoor photographic exhibition to look at I decided to hang around and see what happened. Every so often someone would force a leaflet into my hand for a fringe event, more out of desperation to get rid of them than a desire to have me involved. Even smart jeans weren't exactly de rigueur amoung the crowds who preferred dark grey or black suits. Mind you there was a distinct lack of twinsets and pearls too so fashion has moved on in the Tory heartlands, for the conference anyway. Everyone walked around purposefully frequently gabbling on mobile phones. It was like a little bit of the City of London had moved to the middle of the country. Of course they could all have been desperately trying to offload stocks and shares as the economy melted down ! 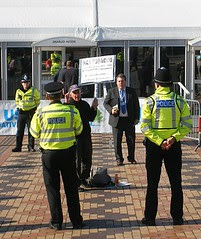 Undoubtedly the highlight was a lone protester with a small placard. His method of persuading the delegate to adopt his point of view was to shout at them. A lot. And loudly. Mostly the messages involved banning the tobacco industry which he accused of genocide. My particular favourite though was his oft repeated question, "Who likes nuclear power stations ?"

Most people simply ignored all attempts as engaging in debate which wasn't surprising really. Much as I like a discussion, I prefer not to start when one party is already at shouting point. In fact, so hopeless was he at protesting, I wondered if he had been brought in from "Rent a Trot" to confirm everyones opinions about the opposition. I suppose he gave them something to talk about inside, even if it was more likely to be along the lines of "Did you see that idiot..." rather than, "You know he's right about tobacco..."

At one point the the rhetoric revolved around Article 10 of some EU directive which protects out right to free speech. There were a larger number of police around at that point and our hero decided that they needed a refresher course in the law covering this area, specifically why it meant they couldn't arrest him. At one point half a dozen were looking on and an inspector went over to have a quiet word, I think he was pointing out that they had no intention of arresting him no matter how much it would make his day (Go on officer, do the handcuffs. And a tap with the truncheon too. I love it !) to which he bellowed that if they tried he would be happy to have his day in court. Talking to one of the dayglo stormtroopers it seems that he does attends all the conferences and would keep up the shouting all day every day. If nothing else that shows commitment and stamina.

My own hopes of protest were not going well. I hadn't seen a Major, Thatcher (out, Out, OUT) or Cameron all day. In fact the only person I'd recognised was Matthew Parris who is a lot less shiny and quite a bit taller than he appears on the telly. After looking around it became obvious why. Next to the ICC is the Hyatt hotel where the politicos stay. There is a glass walkway between the two over Broad Street. Quite simply the "stars" didn't go in through the tradesmans entrance, so we didn't get to mingle.

That wasn't the only reason though. Chatting to another conference tourist it seems I had missed shouty protesting man chatting to Ian Duncan Smith. A proper leader and I hadn't spotted him ! The main problem is that had the entire shadow cabinet walked amongst us wearing badges that read "I'm a Cameroonie" I wouldn't have recognised them. This is despite the fact that according to the web site there are enough to fill a reasonable sized bus (I know they wouldn't be seen dead on a bus but you get the idea). Lets be honest, most people could probably recognise DC, Billy Hague maybe, possibly George Osbourne at a pinch 'cos he's been on TV a lot recently, and then all they have left is Boris Johnson who isn't technically on the front bench any more.

Eventually the crowds thinned. The guys from Shelter recounted their woes to each other - they couldn't give away T-shirts to the attendees. In fact one delegate had explained that crashing property market would solve the homeless problem as "everyone will be able to afford a house". The Oxfam people had better luck with canvas bag freebies but not as well as the Telegraph with their plastic versions. The prize for handouts must go to the Spectator magazine whose attractive staff distributed many copies as people walked past. Their star though was a slightly scruffy bloke who wore his sash like a necklace or lose scarf and had plainly been told to go and do this. He did for the absolute minimum time possible and then retreated to go and do something useful I suppose. 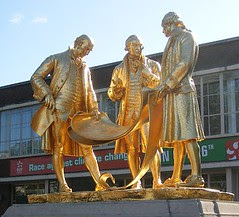 What the ghosts of Matthew Boulton, James Watt and William Murdoch whose gold clad statues look over the closed streets would think of this I can only wonder. In their day they were real powerhouses, men who made things happen. Now we have sharp suited people strutting around thinking they are the new masters of the universe - which in a way they are. But none will ever come up with anything as revolutionary as these great men who drove the industrial revolution and fundamentally changed Britain so many years ago.

More pictures on Flickr.
Posted by Phil Parker at 01:27