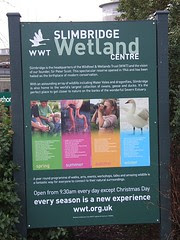 Slimbridge
Originally uploaded by Phil_Parker
Where better to spend a parky January day than wandering around some wet fields ? Yes, the sun is out and the temperature is in single figures but the car park at the Slimbridge Wetland Trust is absolutely chocka.

The facts: WWT Slimbridge is a wetland reserve managed by the Wildfowl and Wetlands Trust on Gloucestershire. Created by artist and naturalist Sir Peter Scott the reserve was opened on 10 November 1946. The site covers 3 square kilometers, a portion of which is landscaped for public wanderings with the rest given over to the birds although there are several hides to allow us to watch.

On arrival adults are relieved of a hefty £8.75 in the visitor centre, an impressive building home to a restaurant, art gallery, inevitable shop and a viewing tower. Most then head straight through to to see the birds. En route the centre helpfully sells you a bag (or if you have been before and know what you are about see, bags) of bird seed. Celever idea this - the birds need feeding and we are happy to pay to do it ! 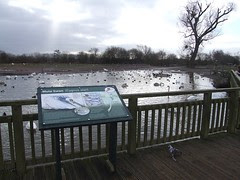 Outside again and there are ponds. And birds. Lots of birds. More waterfowl than you can shake a stick at unless you spend a lot of time stick shaking having trained for many months to build up stamina. Since the trust take a dim view of activities involving wobbling wood, it's better to throw some of the seed. Of course this attracts the birds allowing a closer look. Actually, near the centre they aren't so bothered as everyone lobs food and therefore they are all pretty full.

Next you pass "Welly Boot Land", a brightly coloured children's playground that does its best to educate and entertain. Being rather too old for this attraction I can't describe its charms. The boots on sticks looked pretty though.

The grounds are cleverly laid out to take the visitor through various enclosures which provide different habitats for the winter visitors. The route winds its way around with no need to retrace your steps. Allowing for lots of feeding and cup of hot chocolate at the far side of the site, 3 hours seems like a reasonable day out for someone only passingly interested in birds. Several of the visitors wearing camouflage gear and toting cameras the size of a bazooka were obviously planning a longer stay.

To be honest I can't claim to be able to identify most of the birds I saw as you'll be able to tell from the photos on Flickr but I can tell them apart. And I enjoy feeding them especially in winter. Many of the geese will take seed from your hand, the Nay Nays (Hawaiian geese) seem 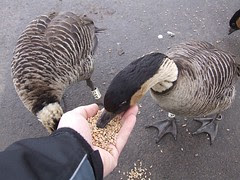 to expect this and gently pursue anyone who hasn't handed over suitable amounts of grub.

January was being kind, the day was dry and bright with no wind. Plenty of winter clothes made for a pleasant stroll. Some relief is provided by a tropical house half way round. Not that I saw much as the warmth steamed up my glasses and camera lens. Thoughtfully a hot air hand dried is provided just inside the door to sort this out. Again I can't identify the species but there were some of the cutest pygmy ducks ever in there.

Back outside the careless visitors will be wishing they had paced themselves with the seed or bought more bags. With quite a lot of walking and loads more attractive feathered friends demanding your attention stocks can be running low.

For the serious twitcher, several hides are provided. These are covered and nicely wind and rain proof. Although the views over the marshes towards the Malvern hills do little for me, those birds on view seemed to be the same as seen in the park, I can well understand the appeal of watching them in their natural habitat. It's also nice to see that the Trust is committed to serious work - I'd suspect that the main park is a little too Disney (it isn't unless you own camo gear and chase up and down the country in search of a twitch) for the real bird enthusiast. 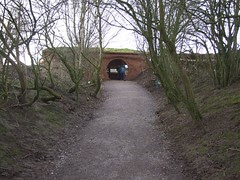 My favorite hide is Kingfisher. Not entirely finished at the time of visiting, it is a stunning piece of architecture. The walls are designed and decorated to look like mud and giant model birds nesting in the sides. The windows look out in three directions one of which has domestic bird feeders hung up attracting finches. I would guess that this is partly to encourage people to go home and look after the birds in their garden. It's a complete break from huts that owe more to the garden shed industry and will be fantastic in the summer.

Apart from this I can't say that much more about Slimbridge. It's nice, the paths are tarmaced (no need for off-road boots, but don't try it in high heels), lots of signs with pictures help explain what is going on in each enclose, you get to feed the birds and at the end of it there is serious conservation work going on. And of course, each visit is different as the population changes during the year.

Go on, take a look at the pictures.
Slimbridge Web Site
Posted by Phil Parker at 02:46