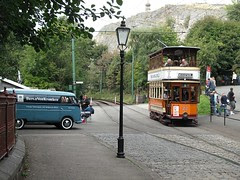 Terrible isn't it – you wait ages for a VeeDub event and then two come along all at once ! At least that's what the organisers of the annual Beelte Drive (geddit ?) must have thought when their low key show clashed with the much bigger VW Action. However I didn't know this at the time, so chose Crich for a day out. Anyway, Action won't be the same at any venue other than the Stoneliegh park site I remember visiting all those years ago just after I got my bug...

Another reason to go is that as a member of the Tramway museum getting in would be free. Besides, I haven't been there since last year and there has been quite a bit of building work on site since then and it's fun to spot the changes.

For those not familiar with the museum at Crich, it has a street scene at one end where you can board one of the many beautifully restored tramcars. You then ride up the line, turn around and return to stop off at the half way point where there is a mining display (the site is shared with a quarry) followed by another ride back to the tram sheds and displays. Trust me, if you like vintage transport, it's fantastic.

Add to this a load of old Volkswagens, not just Beetles but Type 2's, Wedge's, Ghias and (grits teeth) some of the watercooled stuff and what better way to spend a Sunday, even if it does involve a drive up the M1 ? 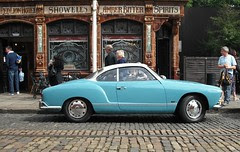 When we arrived, there were old VW's everywhere. In the car park, around the bandstand and filling the street scene. All the time the trams kept up a shuttle service and seemed to be doing excellent business. I don't remember the average age of the audience being so young either which shows that the museum is very cleverly attracting a new audience with these special events.

After a tea and choccie cake stop we took a ride on the top deck of a Liverpool Green Goddess. The weather was fine and the Derbyshire countryside looked lovely. Even the farm in the next door valley appeared to have been tided up a bit. Well the vehicle graveyard looked a bit smaller anyway.

At the mining exhibition there is a little hut where a fantastic, enthusiastic and very knowledgeable lady sells you some rocks from around the world. I can't resist this every time – there is no high pressure sales technique, just fascinating things which she insists you don't leave with until you understand what they are and where they come from.

Back at the street end we arrived just in time for the first parade. Most of the cars withdrew to the car parks and then drove in convoy back down the street, turned around and did another lap. There were so many of them that the tail was quickly caught by the head of the line and we had a few minutes of continuous dubbin' 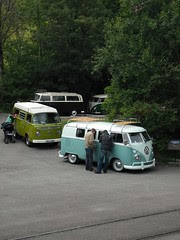 Lots of exuberant horn blowing was quickly stopped – the local residents don't appreciate it apparently. Shame really as it was a very happy sound and can't be any louder than the blasting in the quarry can it ? Most of the drivers complied but there are always one or two especially an idiot in a while bug wearing a neck brace who seemed to be under the impression none of the shouting applied to him. The brace was obviously not to hold up the great weight of his brain...

Because of the clash, trade was limited to a model stall and one selling the coolest VW shirts I've ever seen. Very sensible prices too. If they had take plastic or I hadn't spent so much the night before my wardrobe would be even fuller At least I bagged one which will be on a trip to the pub very soon.

All in all, a really lovely little event. OK so there wasn't the pizazz of the bigger shows but this was fun. People laughed and smiled and clearly enjoyed themselves even if there weren't the tradition piles of rusty exhaust bits to sort though found at bigger shows.

By now all you want to do is see photos, so please head off to my Flickr collection where they are waiting for you.

Email ThisBlogThis!Share to TwitterShare to FacebookShare to Pinterest
Labels: VeeDubing