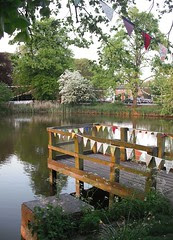 "What we need", someone will have mused, "Is an excuse for a really good party. Tell you, what, have a word with that Royal chap and tell him it's time to make an honest woman of his girlfriend, then everyone can have an extra day off and bunting sales will go through the roof."

And so it is that this years Long Itch beer festival runs for 4 days, and the whole village is bedecked with more bunting than you'll see in the rest of your life. It's everywhere.

Anyway, this year there was a plan. Turn up early and go home having drunk some beer but not on the last bus in case that nice Mr Cameron cancels it before it arrives leaving us to hijack the dray that provides a pub-to-pub service for those unable to walk the distance.

First stop, The two boats for a nice Maldon Gold. Standing on the towpath in the glorious sunshine, you don't get much better. A single boat chugged by, people walked past - sometimes with dogs dragging them along and apart from two kids racing past on their bikes (one nearly ended up in the canal, there would have been a cheer), nothing to disturb the massed crowd of drinkers spilling along the banks. 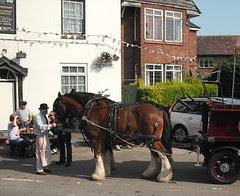 Then a quick stroll through the village centre to the Green Man where I had been promised a free pint involved passing a couple of shire horses working the Hook Norton brewery dray. How nice it was to see these fine beast and how unsurprising to watch as a BMW pull up beside them, honked his horn and then drove off. The horses looked unperturbed but the dray man wasn't impressed. I'm not sure where the car ended up, and I looked out for it as we continued, but if there is any justice it was in a stone wall at the loneliest spot on the road network.

Reaching the Green Man and squeezing inside, the staff were very busy and so I decided to hang on and pay for my pint as well as the commemorative festival glass. Looking at the signs, I knew there was only one beer for me - Chocoholic.

The contents of the glass were dark brown and at first tasted of very little. Then, all of a sudden, there was a real taste of chocolate. Good stuff too. Not strong, but pleasant. I'll confess to being a little wary as this sort of thing can be a bit gimmicky but it's not bad. One pint was sufficient but definitely worth a try. 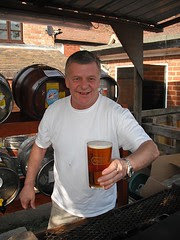 Wandering around the back of the pub, past a sign that said "Slow Children Playing" - handy as you know you won't have to try too hard to hit them - we found the pub garden along with another bar. This time I was determined. After waiting for the queue to subside, I enquired and my glass was filled with some Flying Dutchman. A really nice golden pint, all the better for being free.

After a few sips I felt the need to make a trip to the gents, partly for the obvious reasons and partly for journalistic purposes. After last years write up, I had been advised that the facilities had been refurbished. I didn't think there was anything wrong with them before but had mentioned an odd barrier to stop people falling into the urinal. This has gone to be replaced with a unit further up the wall. While performing a full test of this, another person arrived and stood alongside me.

"God, wearing this skirt really gets in the way." he said.

For some of you, these might not be unusual words to hear in a toilet. Me, I quickly finished up, washed my hands and left him to it.

All quickly became clear though a few minutes later. Into the middle of the garden strode St George, The Black Knight, a couple of other characters and a bearded mad wearing a dress. Think Snow White with a few days stubble. These were the Coventry Mummers who were putting on short plays at each of the pubs in return for donations and beer. 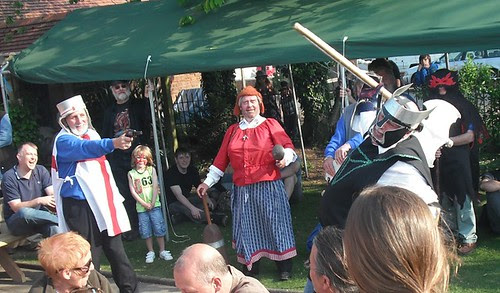 St George took on the Black Knight in a fight and was killed. A Doctor brought him back to life with a few drops of Speckled Hen beer. They fought again, the Knight managed to wrest Georges sword away from him and things were looking bad. At the last minute the patron saint of England pulled out a pistol and shot the Knight.

We all cheered. It's not Ibson but than you don't want heavy drama when you are in a sunny pub garden drinking beer do you ?

As well as checking out the toilets, I'd been recommended toward the Noodle Bar in front of the pub. This was a good move - the cardboard box of freshly cooked sweet & sour chicken noodles was delicious. I did try with the chopsticks but quickly reverted to the wooden fork instead.

You know what it's like though. You have a Chinese meal and a few minutes later you fancy another one. We wandered back to the Harvester where I bought some Liemass Fruit beer. Pricey at over a fiver a pint but since it contains fruit it must be healthy. Mind you I think Jaffa Cakes count as one of your "five a day" so I might not be any more reliable than "Dr" Gillian McKeef on this score. The colour was a lovely red and it tasted nice.

It also made the idea accompaniment for a Water Buffalo burger. The meat is finer textured than normal beef, but otherwise I'll be honest and admit I couldn't really tell the difference. Perhaps less ketchup would have helped my palate ! Nice though and this year I didn't manage to get it all over my shirt which was a bonus. 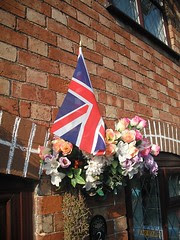 The pub car park/garden was busy. In the corner were some of the local youth who provided entertainment for those who spotted them. One wearing florescent sunglasses managed to accidentally snap the leg off his metal char - the ground isn't level and I think he tried leaning back on it. For the rest of the time we were there one or other of them could be seen perched on it concentrating hard trying to pretend that 3 legs was as good as 4 so the landlord didn't spot them.

Finally, with the sun setting it was off the Buck and Bell. Our timing was excellent as we managed to get the drinks just before the beer ran out and customers were greeted by pumps with no labels and a cry that the barrels were being changed. My final pint of May Queen was light and refreshing but it's delivery from so near the bottom of the cask might have strengthened the flowery/washing up liquid taste a bit, something I can never decide if I like or not - for at least one pint anyway ! Still, at least we were inside as the temperature dropped and the place was quiet apart from the huge scrum on the road at the front. It's not often the biggest crowd is on the road.

Another good event. Lots of nice beer, too much to drink in a single day anyway. As the T-shirt says, Same again next year please !

See all my photos including every pint and bite here.