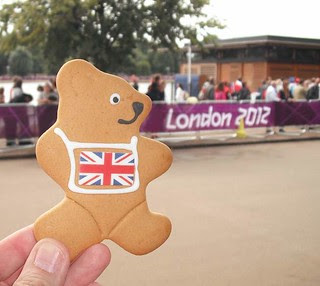 Olympic tickets ? Didn't apply for any.

This is partly because I'm not interested in sport but mostly thanks to the constant warnings of transport meltdown. Travelling to Stratford is easy enough, even when I realised that it's the fake one near Albert Square and not the real one a few miles away on the banks of the river Avon. Getting back seemed to be a whole lot harder. The London games would be fine for Londoners with access to the underground system, for the rest of us it appeared to be a TV experience.

That's annoying as you don't get the Olympics set up camp in your country very often. Worse, it seemed pretty quickly that the transport hadn't descended into chaos. To cap it all, people I know kept posting photos on Facebook and flaunting their close proximity to the even as much as if they were wearing pearly King and Queen costumes.

All was not lost - not every event took place inside the Olympic park. You can't run a Marathon in there and neither it seems, can you hold a Triathlon. This event has to take place in Hyde Park where there is water and roads. Best off all, the men's event started at a sensible to time of day for those wanting to use a cheap train ticket. 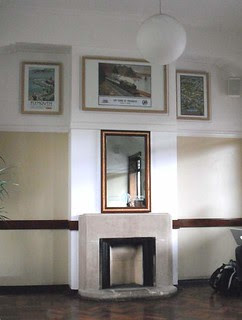 My plan involved catching a train that arrived in Marylebone station at exactly the same time the race started, For the first 20 minutes or so the athletes would be splashing around in the middle of a cold lake - a bit rubbish for the spectators. By the time they made it on to dry land, I reckoned I could have crossed the capital to reach the park. I've walked this way before so had a pretty good idea of the timings.

At the station the platform was fuller than normal and with plenty of people who obviously didn't catch many trains. They were there too early and looked at everything and everyone with the air of someone who has just landed from Jupiter. When the train arrived, they all stood in the wrong place whereas us seasoned travellers know better.

Unsurprisingly, it was busy. I had knew the chances of a seat were slim but reckoned I could live with this. My drink was in a bottle, my paperback small enough to read while vertical in a crowd. The other passengers surged on and things were looking grim. I had spotted that there was another train in five minutes time so decided that the one in front of me could mop up the mob and I'd have a more comfortable ride in a few minutes.

This was a mistake.

The second train was very short - two coaches long - and busy. Being the sort who, unlike most people, will sit beside someone else I did get to perch and look back at the crowds in the entrances.

Our train gradually filled up at each station it stopped at and I realised what I'd done was swap a busy service that arrived in just over an hour for one that was just as busy but took 90 minutes. By the time I arrived, they would be out of the water and on to the bikes.

The passengers exited the train when it arrived in London in much the same way toothpaste exists a tube. Dodging through the crowds I headed in the rough direction of Hyde Park. Hitting Oxford street I knew I was close. I could even see the crowds.

Not knowing London particularly well and Hyde park even less it was handy that the Olympics was big there. Signs directed visitors to the free viewing area. You couldn't miss it to be honest, ringed with a 15 foot height green steel wall, a huge chunk of the area was more prison camp than green and pleasant land. Thinking I could walk around it, I started against the flow of the crowd but quickly changed my mind and found myself near the entrance. 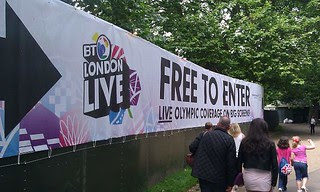 Access to Stalagluft Olympic are involved joining one of many queues, being searched and not taking in any food and drink, at least that's what the sign above the checkpoint said. Outside, Londoners were picnicking to dispose of thier contraband before heading in. I didn't fancy this so carried on walking, assuming that my Olympic (viewing) dream was over.

Yet again, I was wrong. rounding the barrier I could see the lake. Heading toward this thinking that I could at least get some photos of the floating things I noticed the crowds. Reaching the edge, I found myself around 15 rows back from the track and just in time to see the cycling section finish its last lap. Result !

It seems that if I had endured the searches all I'd have been able to do was watch the events on a giant telly and buy the "approved" food and drink from the vendors. Quite frankly, I can do this at home by sitting in the corner of the room under the screen and refusing to consume Pepsi. 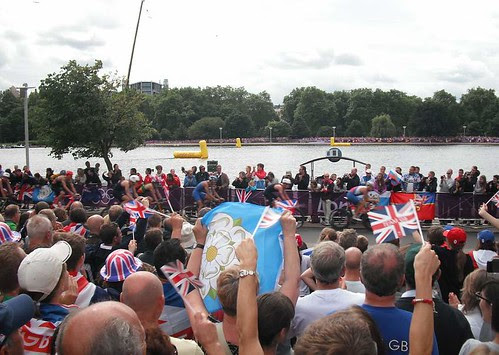 Being tall, I saw the top half of Lycra clad men on bikes (as far down as I wish to see thank you) and then all the laps they did of the lake. Well, the bit in front of me and some on the other side of the water.

Every time the runners came around, a sea of arms waving cameras went up. Clapping and cheering started and boy it was loud. One clever move was having the two British competitors at the front and both with the same, easily chantable name. "Brown-Lee" bellowed the crowd as the leader passed. Then some cheering for second place and then "Brown-Lee"all over again.

A commentary over speakers kept us up to date on progress although it was difficult to hear over the roar of three circling helicopters. I only realised the race had been won when the cheer went up.

Gradually the crowd disbursed. Focusing on the race, I hadn't spotted that the bank behind was also full of people. Nipping out during lunchtime to catch some Olympic action seemed popular judging by some of the clothes - and why not, you only get to do it once.

Following the sea of people, I headed in the direction I though Mayfair was. It's not a part of London I've wandered before and that was my plan for the rest of the day. Reaching the edge of the greenery there was a more poignant sight. 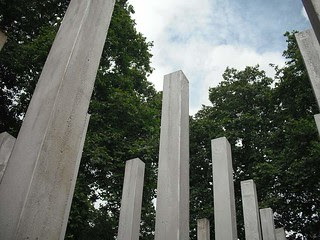 52 silver-grey pillars commemorate the lives of those murdered in the attacks that took place on the London Underground in 2005 - the day after it was announced that the city had won the right to hold the Olympics.

A group of 4 men decided that in their perverted view, God would be better celebrated by killing people than by his creations striving to achieve the best they possibly could. That and they felt it would allow them to jump the queue to a glorious afterlife which on its own seems a bit selfish.
On a sunny day, having seen tens of thousands of people celebrating the efforts of others, it makes you wonder why.

My Olympic photos on Flickr
Posted by Phil Parker at 03:29