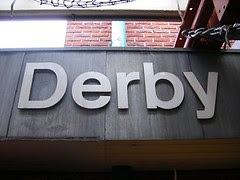 Welcome to Derby
Originally uploaded by Phil_Parker
Some towns names become more than just place names. For example, Rugby is a provincial town in Warwickshire and also the name of a game played by men with odd shaped balls (Ho Ho). Likewise Derby has given its name to the practice of two local football teams playing each other while the fans riot. It's also the most famous flat racing even of the season, held in the manner of the Pamplona bulls, through the centre of the town.

For the visitor, the most striking thing about your arrival is the fact someone decided to rebuild the station big time. The canopies are held up on girders and everything is covered in sackcloth. Whether this is to protect it or some attempt to make it look prettier I couldn't work out. If the later then someone needs to take the great genius aside and explain that the “Cowboy builder loft insulation look” isn't in vogue this year. 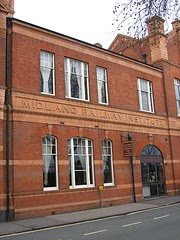 Normally the station is just somewhere you pass through but for Derby it's the reason for existence. The first buildings you see on leaving the forecourt are railway cottages. Long rows of identical buildings built to house an ever growing workforce. At the time brick walls and a slate roof would have seemed like serious luxury to a workforce that could trace their lineage back to the fields just a generation ago.

Further along the road you find the Midland Railway Institute. Railway companies liked to look after the minds of their employees – although a cynic might suggest that a well educated workforce was in their interests and if the labourer could be encouraged to spend his free time in personal improvement then the company might as well make this easy for him. The building date from a time when civic building was something to be proud off rather than a race for the cheapest structure you can throw up. The architecture isn't flamboyant but does have nice detail touches - company names are set in stone indicating the length of time they expected to be around. These guys had an eye on the future. Pity it’s now a pretentious bar but then progress isn’t always forward.

Despite several precious visits to the city, I followed the sign pointing toward the centre which takes you around the side rather than through the shopping centre. This takes you through a light industrial area full of motor factors and small workshops. There is even a showroom for BSA, Norton, Triumph and Velocette motorcycles. I’d never heard of the last make but peeking inside, there was an example of each along with a sales counter for bits. 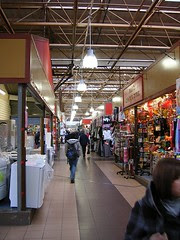 The route ends up at the back of the Kingfisher centre, one of Derby’s two indoor markets. This is best descried as ugly. The management prefer “Britain’s Largest and Best Indoor Market.” although the good people of Leeds will argue with them as theirs is at least 4 times the size. The stalls are lock-ups under a high metal roof that will be interesting in the rain. This market has seen better days with around 1/3rd of the stalls closed and shuttered. Mind you there are goodies to be found. If you want tailoring, wierd electrical products or unusual food then it's the place to go in Derby. Frustratingly I'd eaten on the way so had to deny myself the joys of proper market style sausage, egg & chips. Damn.

The prize for the most oddball stall has to go to the magazine seller retailing out of date mags at a quid a go. Ecologically this makes sense as it saves pulping unread issues. I wonder why there isn't more of this. OK so some people will wait a month to save money but others will pick up something they have never read before. WH Smiths might have a few less people (OK men) cluttering up their isles reading too. 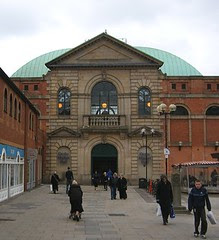 The centre leads out into the main pedestrian area and then on to the Derby Market Hall. This is a much more attractive proposition. With a airy high arched roof and second floor balcony it's the sort of place you might let a tourist see. Actually it's one of the prettier bits of Derby so you might as well point them in that direction.

All the usual market fare is present – hardware stalls, haberdashers (is it only me that thinks the tubes of buttons are pretty ?), cheap clothes, mobile phones etc. Pride of place goes to a newsagents in the centre with easily the biggest selection of magazines you'll see for a while. This doesn't mean acres of porn either (if my local newsagent is reading, please take note) but stuff sourced from around the world. Several European languages were on the covers and some had obviously been imported from the USA. With a location bang in the centre of town there is as much passing trade as you are likely to find in Derby so it's good to see the owner has capitalised on this.

The balcony doesn't do as much business but there was some junk to be bought and a manga shop for the students.

I was headed towards the Derby Model Railway exhibition which takes place in the Civic Cente. Opened in 1977 it displays all the hallmarks of a building from that time. It's ugly, difficult to find your way around but it does at least bring people into the city centre outside of shop opening hours. 200 parking spaces must have seemed so generous during the planning process but nowadays this just elicits moans about there not being nearly enough.

All the usual circuit of acts familiar to anyone looking at the posters outside a provincial venue are now booking. Roy “Cubby” Brown was due to visit and his people had postered the town very effectively. Apparently off stage he's actually quite a nice person...

The town square has been handed over to a huge multi-peaked marquee ” called the Sabai Pavillion - home to “The Lady Boys of Bangkok. This is the tenth anniversary tour apparently and they expect to fill 16 nights of shows while in town at up to 22 quid a head.

I think this tells you a lot about Derby and its citizens, possibly more than you will want know. Ladyboys are about as wrong as you can get in my book. Take the wrongest thing you can think of and multiply it by your telephone number to get the idea. OK - if you want to dress up in drag then that’s up to you. Hairy rugby players in skirts - funny. Lithe Thai youths who look far too like real women - nonononononono.

Anyway, on the way back I discovered a new trick. From the people who stand at the edge of the pavement with the baby buggy in front of them comes the idea that if on a crowded platform, you want to get through, just push your child area of you and hang on. People will obviously let the child trough ‘cos they are small and by inference you’ll get through too because we don’t want to separate a parent and kiddie do we ? Of course if try this beside someone who hates kids it doesn’t work too well and you find yourselves either side of a person in a crowd joined to your sprog like some weird Siamese twin. And your face will be stuffed in their backpack. And they won’t care. At all.
Posted by Phil Parker at 06:51