These boots have been a lot of places. I wore them when I wandered around Dresden. They have tramped the streets of Prague and the boulevards of Paris. They have spent more time on 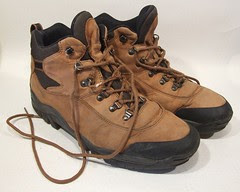 trains than many of the egg sandwiches you find in the buffet.

Originally from Hawkeshead, I bought them because they were light and didn't look like a walking boot. That way I could go to the pub in them and not look like I'd yomped across Scarfell Pike. But all good things come to an end. On a bus on the Isle of Man last year I noticed a crack in the bridge of the sole. I had to admit that the tread was missing from most of the ball areas too. And the soles did let in a bit of water sometimes. But they were comfortable and I like wearing them. So they stayed.

I did hope for a straight replacement but Hawkeshead don't do anything similar now. The nearest I found was in the Army and Navy store in York but those turned out to have steel toecaps and much as I love my tootsies I wasn't going to put up with that sort of weight. Besides, can you image the embarrassment of rusty boots ?

So these boots have come to the end of their journey. They will go to be recycled into whatever old boots get turned into and a new pair that are nearly as good will replace them. I know there are people saying, “It's only footwear for God's sake, get over it !” but no other pair of my shoes have been only as many adventures as these.

Perhaps rather than being picked up by the bin man I should arrange a Viking funeral and send them off to boot Valhalla on a burning boat.
Posted by Phil Parker at 09:23