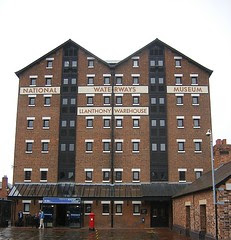 Do we “Disneyise” the past in museums ?

Having taken a trip to Gloucester docks the whole area is so clean and tidy – a far cry from the images of the working port I've seen in books. The stone buildings are free from smoke and dirt. The pavements are clear and level. I fear that in gentrifying the area we have lost the atmosphere that existed in The Good Old Days.

British Waterways Museum is found in the Llanthony Warehouse in the corner of the site. For a very reasonable £3.95 there are two floors of exhibits and several historic boats to explore outside. I was lucky, on a damp day in the holidays, the place wasn't overrun by kids making it easy to see everything. I'm not saying that junior shouldn't get to go to a museum like this, just that if he or she isn't interested then please tie them up outside where there is a covered area to keep them dry, and let the rest of us enjoy the efforts of the curators.

Somehow I managed to start in the upstairs gallery. It's littered with examples of loads and loading implements that would have been 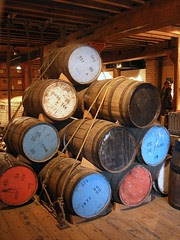 a common sight in the heyday of the docks. They aren't tucked away behind glass either. Built for industrial use it's obviously been decided that things like sack trucks can take a bit of handling from the sort of people who visit museums. There are proper hands on exhibits too – the principle of the block and tackle is explained by three sacks hanging from the ceiling with various numbers of pulleys and by pulling on the ropes you find that some are easier to lift than others. Aimed at the smaller and weaker visitor the sacks aren't exactly challenging but I suppose at least if you were to get your head underneath one when it came down in a hurry the concussion wouldn't last too long.

Good use is made of archive film too. One from the 1970's had Johnny Morris opining about “the lovely life on the water” with bucolic shots of pleasure boats and canal sides with flowers and grasses in the sunshine. A little bit of history is injected but nothing involving hard and heavy work or living 6 to a cabin in the deep midwinter. Further round the room though is the excellent British Transport Film “Robert Reid reports on British Waterways”. In this Robert Reid travels up the Bristol Channel by various means of water transport commenting and interviewing people as he goes. While maintaining the BTF standards for production, the film is obviously a period piece. The interviewer travels in a tweed 3-piece suit with hat, the docks are still working well with much crane and stevadore action. There is no sign of the ISO container on any of these boats – everything is loaded and unloaded by hand. Many officials are interviewed and all are bullish about the future for water transport in the future. At this point the film introduces a campaigning element with a call for more goods to be sent by water to relieve pressure on the railways and fledgling motorway system, something British Waterways are still suggesting.

Watching the shots of Gloucester docks in the 1960's and then looking out of the window provides a real contrast. Now we have offices, flats and a giant antique centre. Once thousands of men would find work and ships from around the world (Empire in the film) called to offload cargo. 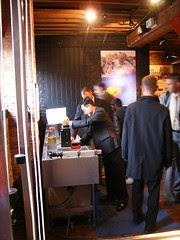 Downstairs the highlight (for me 'cos I'm a big kid) is a model canal system. Basically a stainless steel trough with water circulating through it with various types of lock. A couple of bathtime plastic boats are swept along by the current and visitors can work them through different locks by opening sluice gates or paddles. Someone has put a lot of thought into this exhibit – it's robust and accurate, the locks really do work like real ones. Of course this will be lost on most children who will just pull on levers and gates but maybe some will get an understanding of the mechanisms involved.

I wasn't alone in my appreciation of this either. Behind me a ground of men, all very smartly suited and booted, had a go and were thoroughly enjoying themselves despite the tendency of the water to escape onto the operator. I suspect they were a delegation to a local conference (there is a suitable commercial hotel on site) and bet this wasn't how they expected to kill time before heading home !

Outside the weather was inclement so when I found a sign inviting visitors to have a look below decks on the bucket dredger I descended the steep and slightly slippery steps into the vessel. The dredger is divided into two halves – it's a but like being inside a steel cattermeran. The entry takes you into living quarters with furniture and replica food. Further forward is the engine room with steam engine and boiler. I was accompanied by one 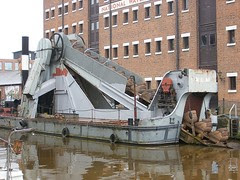 of the Friends of the Waterways Museum whose name I didn't get but explained in great detail how everything worked. Asking the odd intelligent question showed a little knowledge so I, and those who followed me into the room, learned everything we could possibly want to know about the workings of a dredger. You don't get this from anyone except an enthusiast who really cares about the subject. Perhaps there is a role for me there – the thick leather belts driving the buckets that scoop muck out of the bottom of the port are joined in exactly the same way as film in a cinema with all the same fun of tensioning the band except that this involves thick steel teeth and not sticky tape !

Back in the open there are other boats to look at, including a rare concrete barge, and a working steam crane that is demonstrated several times a day.

For the entrance fee I had several hours of entertainment. OK so I'm interested in the subject and better suited to the sort of museum where you can learn rather than just bang buttons and look at expensive (but usually rubbish) video displays. Located just off the centre of the city this is ideal for those who want a day out as you can do it and look around the shops comfortably.