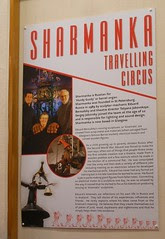 It's school holiday time. What better way to entertain the kids for half an hour than to take them to see a circus ? Look, the Gloucester Museum has a free one - it's the Sharmanka Travelling Circus. Great, lets take the sprogs in there for a while, it'll shut them up.

Hold, on, what this ? I've dragged them past all the bones, roman stuff and the biggest collection of stuffed animals I've ever seen, past dusty old paintings and all there is in the room is some weird machines. We can't even see them properly because the lights are funny. Still, we get top sit downwhich should keep them still for a bit. 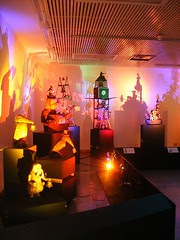 Hold on, the show has started. The carved monkey things have started clanging bells. At least it's got their attention.

The bells have stopped and the next machine has started. Some figures are jumping up and down. I'm not sure what they are but at least there is movement and noise which keeps the kids quiet.

Oh, no, now they've started asking me what is happening. According to the label this machine is called the leg and is inspired by the movie "Cabaret" and reflects the decadence and escapism of 1930's 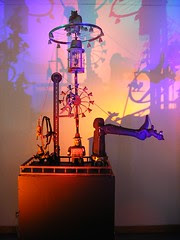 Germany which was being overshadowed by the political events of the period. How the hell and I supposed to explain this to an 8 year old ? I'll tell him it's a penalty taking machine. Yes I know there is a little man hanging on the foot, it's foreign.

More clanging. There is a little golden man jumping around on the pointed bit of a machine. Apparently this is the artist. If he looks like that I'm surprised he can make anything. God knows who's paying for this stuff.

Last machine. There's a naked woman jumping up and down and holding two blokes who are pointing away from each other by some reigns. It looks a bit kinky to me. The labels says women are the representation of death in Russia. I know what they mean, it was the missus that told me to bring the kids here. At least the lights have come back on - I'm going to take them back to see the stuffed animals, at least I know what they are supposed to be.

Phil's note - Tim Hunkin is much better at this stuff.
More pictures in Flickr
Posted by Phil Parker at 01:57

Email ThisBlogThis!Share to TwitterShare to FacebookShare to Pinterest
Labels: Gloucester