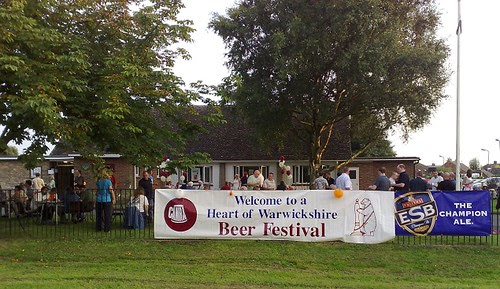 Celebrate the beer ! All Hail to the ale ! (insert other stolen catch phrases as required)

What could be more English than enjoying a warm beer on a summers evening in a rural village ? Apart, obviously, from getting staggeringly drunk, running around a town centre looking for a fight and ending the evening in a pool of vomit anyway. None of that in Harbury though, this is proper grown up appreciation of traditional brews.

The event takes place in Harbury Village hall. Despite having no less than 5 pubs, more drinking space is required when you have 60 different beers to chose from. With a bus stop outside you don't get a much more convenient location and for a change, public transport is well patronised in the sticks. As the weather was unseasonably (in the new world order where summer is like winter but with slightly higher temperatures) warm and dry everyone spilled out onto the grass outside.

For the uninitiated, a beer festival works like this:
When you go in you pay an entry fee. For that you get in (obviously, unless you are under 18 in which case you go back out again), a beer glass (which you can hand back for the return of a deposit at the end of the evening if you don't want a souvenir), a guide to the beer available and a card with a grid of 10 & 5 pence's.
You could wander round savouring the ambiance but most people head for one of the bars. There, the cognoscenti will examine the guide and pick accordingly. The rest of us just choose a name we fancy.
You order your drink, deciding between 1/3, 1/2 and a full pint and hand over your card as payment.
The barman fills the glass as required and crosses off some of the payment. 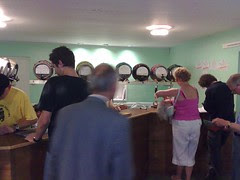 You drink the beer and repeat the above as long as you can either stand/run out of money(more cards can be bought)/the beer supply lasts/the event closes.

One couple, Mr & Mrs Tom Dunne, had in a stroke of genius, decided to hold their wedding reception at the festival. I can't think of a better way to do this - there are handy bars for the guests, you can give them all a beer voucher sheet and when they run out they are on their own, you have space for a band and everyone will remember the "do". They paid for the band, saving the organisers the cost too which was generous.

Anyway, what I should present is a detailed description of every beer drunk conjuring up the taste for you with my eloquent words. But I can't, partly because I'm not that good at writing and partly because I was drinking beer at the time and can't entirely remember each one in detail.

Here's some highlights though:
Strawberry Blonde - The guide says: 4.4%. Leadmill, Denby. A golden coloured beer with a bubbly white lead. This hoppy, slightly fruity beer has a dry malty finish. Some sweeter honey notes are apparent. - I say, it was a nice.
Pink Elephant - The guide says: 5.4%. Hampshire. Distinctively different; with pale malt and red wine grapes, which give a surreal flavour. Don't drink to excess, or you will see Pink Elephants - I say, it tasted like a mix of beer and wine and was very nice. Slightly pink too.
Old Field Perry - The guide says: 7.5%. Dry , yet still quite fruity. - I say it smelt like vinegar and tasted a bit like a liquidised barbecue but was very nice. Quite a sharp shock after the beer but very nice. 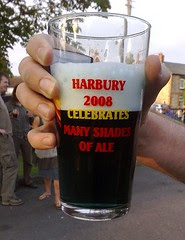 Black & Tan - The guide says: 4.3%. Houston, Renfrewshire (no not America, it's beer after all). A traditional mix of stout & pale ale - I say it's what was left at 10pm as the beer ran out. Quite nice though.
Navey Blue - The guide says: 4.5%. Church End, Warwickshire. A dry hopped golden beer soaked with fresh blueberries. It is hopped with Styrian Goldings and First Gold Hops - I say, it's blue beer. That is Beer that is Blue. Yes BLUE.

Obviously there were other beers and ciders and perry's (no lager obviously) but those are the ones I remember. The Scouts did some excellent food including hot dogs containing beef, horse radish and, wait for it, Beer.

The evening sort of drifted to a close as the larger than expected crowds finished off all the beer a bit earlier than might be expected but I don't think anyone really minded. For those that had been there all day, arriving at lunchtime and staying until the break at 4pm then heading off around the local pubs is apparently popular with some with rather stronger constitutions than mine, I doubt that they noticed anyway. 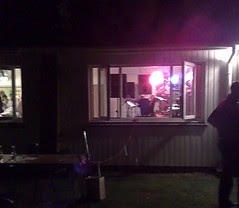 One thing that strikes you though is that no one was actually drunk. Mellow, relaxed or tire perhaps but not proper British town centre drunk. Even the bus home was quiet. We can drink like the French, we just need to right stuff that's all.