Trips like this are best started gradually. Although I was heading for the top of the country my intention was to break the journey into nice easy sections. First, I had to catch a train to Edinburgh.

Because of the unique way that train tickets are sold in this country (Thank you John Major) there was a saving to be made by traveling to Birmingham and then on the Scotland's capital. That first leg was easy and pleasant with the train rolling through the Warwickshire countryside in ideal traveling weather – sunny but not too hot and with a hint of cloud to make the sky interesting.

An hour in Brum allowed me to pick up lunch including the obligatory muffin (chunky chocolate) with time to kill in the New Street coffee concession. I'm not au-fait with all these places and foolishly ordered large hot chocolate. Quite why anyone would want a bucket with a handle full of drink escapes me. I'm slightly ashamed to admit that I still managed to finish it all.

My booked seat was free, as was the seat next to it which had been reserved for the same journey apparently. Presumably the quiet train made the original owner decided to sit elsewhere. At least my rucksack appreciated the comfort. There certainly wasn't any need to crowd together at this point. Despite the space, an elderly couple who sat in front of me weren't happy. Mrs Oldear kept ordering her husband off to find better seats – I had plenty of leg room so I wondered what the problem was. He would trot off down the coach and come back and report on the seating situation. She would consider the report and then send him on another sortie, usually just as he had sat down. She seemed to have an obsession with Coach F and kept encouraging him to go and find it. Presumably this is Narnia for the older traveller. Eventually seats were found there and they headed off, never to be seen again.

Running north was made more interesting for me as the train was routed through Bescot depot. To most people this is just endless tracks full of wagons and plenty of rusting locomotives for the train spotters to get excited about. To me it's a fascinating display of the lesser spotted parts of the railway system in all their colours. I wouldn't claim to know what most of it does, but that doesn't matter, you are seeing a side the railway people usually keep for themselves. Ominously though, this diversion had made us 15 minutes late.

The first sign that we were making progress was when we reached Warrington. To many people it's where they live. To me it is proper 'op North and should be celebrated by a donning of flat caps and releasing if whippets - strange how some place names conjure up images in your mind when you have never been there. Arriving in the station the only visible landmark is the giant Unilever building with it's tangle of pipes and tubes carrying vital fluids around the plant. Between towns I enjoyed being able to see out of both sides of the carriage at the same time. The impression of the train snaking and twisting through the countryside.

Preston arrived and all that snaking stopped. We waited in the platform. And waited. The our train manager (remember when they were called “guards” ?) announced that there was a problem with a freight train further up the line. We sat there along with several other trains and after an hour “Trish” first told us we were about to go and then had to tannoy again that she'd been mislead and we weren't. Preston is a nice place and I was comfortable but eventually the novelty wears off. As our stay was an indeterminate length no-one could get off and explore so we had to sit like puddings awaiting our fate.

After just under 2 hour we started again. A couple of miles down the line we passed the errant train. It was shunted in a loop – the solution appeared to have been to use another freight train to push the broken one down the line.

For some reason it hadn't occurred to me to get some writing down while sat in the platform, preferring to read a book instead, I did try once we left but bumpy track and impressive scenery conspired against me. As we rolled through the lake district around Oxenholme anything other than gawping was out of the question, for me at least. The lady on the other side of the isle was oblivious to it all and worked solidly on her laptop all the way through. That's fine, she probably makes the journey regularly, but I seemed to be the only one impressed. OK, it's just lumpy country but it's certainly beautiful.

Sadly because of the delay our train was to terminate at Carlisle. Apparently a train to Edinburgh would leave 8 minutes later from another platform. We arrived but the onward transport was a myth. The next train north was 45 minutes away. 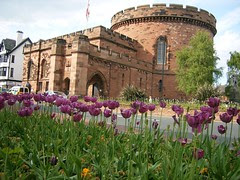 Still, it was a nice day and I had a pleasant stroll around the block. In this instance around the castlelated red stone building just outside the station entrance. While the rest of the passengers hung around the platform it seemed silly not to go and have a look around. The train hadn't arrived when I got back, but the platform was certainly busy !

As expected the train was far too short for the number of passengers waiting (Thank you John Major) but I was lucky (!) enough to grab a spot in the vestibule by the shop. Far less smelly than those by the toilets I find...

A kind of “blitz spirit” was borne of the hardships that come from spending an hour stuck at the end of a coach. The scenery passed us by largely unseen thanks to some twonk in the design office who decided that oval windows too low to see out of when standing, were a good idea. However my companions; an American living in Edinburgh, Scottish student who lives in Stoke on Trent, young mother and surprisingly well behaves 2 year old and quiet lady who spent half the time applying skin cream, chatted away and made the best of it. Explaining spa water to the Yank he pondered the fact that the indication of oil in Texas was sulfurous water, just like the disgusting stuff found in Harrogate.

Edinburgh arrived and my first stop was the travel centre to try and collect my “Freedom of Scotland” ticket for the rest of the week, I ordered this 7 days ago and despite receiving an e-mail confirming purchase, never got the ticket. A call to the customer care centre yesterday and I was promised the ticket would await at Edinburgh. It didn't and the travel centre staff sent me to the Scotrail office as they didn't deal with these. The Scotrail office sent me back to the travel centre as they didn't deal with them either. I bought another ticket. Thank you John Major. (Update: on my return I had recieved and e-mail which was sent sveral days after I got to Scotland, saying that due to a fault in thier system they couldn't accept bookings for railrovers on-line.)

Off to the hotel, booked a week ago. My heart sank when I had to wait in the lounge while they sorted out the bookings. A few minutes later and I was off to another hotel because the first (where I had booked) was full but they had arranged for a room for me at the same price around the corner. Which is why I am sitting in the Regent House Hotel typing this. And wishing it wasn't also home to a party of school children, Apparently, even under Scottish law you aren't allowed to bludgeon them no matter how often they bang doors our should at each other...

More pics in my unruly photostream on Flickr
Posted by Phil Parker at 00:31