There is an old photograph somewhere that is responsible for this trip. It shows Kyle station in the 1950's with the sidings full of fish vans and a steam train in the platform. Since seeing this I've always wanted to go and have a look even though times have changed. The fish vans and steam engines are a memory but I hoped the station retained some of it's charm. 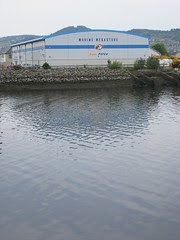 to find a bit more of the city. There is a fantastic if expensive second hand bookshop in a converted chapel just off the centre. I'd already had a stroll down to the docks, which proved of little interest as the maritime stuff is hidden in an industrial estate, so sadly there was only 20 minutes or so to spare and this place needs several visits ! Handy they have a café on site in the balcony for the serious browser I suppose.

Anyway the big surprise on reaching the train was that nearly all the seats were already reserved. A coach party would be joining us further up the line which left hardly anywhere for us casual users to sit. I grabbed a table at the end of the coach and signalled to a couple coming along that there were seats at this end of the train. They sat down and promptly started moaning about the state of the railways. Now this is a raw nerve for me as I feel that rail travel has been badly served by politicians from all sides but especially those who decided to privatise them. I rose to the bait and then thought better off it. The lady was proudly telling another passenger how she had read in the Daily Mail of someone being fined £1000 for standing in first class when they didn't have a the right ticket so I think they might have been somewhat bigger fans of John Major than I am. Deciding that discretion is the better part of valour, I did the sensible thing and headed off down the other end where the bike rack is. In fact the view was so good that I stayed put even when the guard offered me a spot in First Class.

Scottish station names are great. Where else do you find anything as lyrical as “Muir of Ord” ? OK, it's a bit grim once you get there but the name is nice.

Once past the entrance to the Caledoninan Canal the scenery starts out flat and wild. This continues for some miles but eventually this gives way to mountains an valleys. These are still wild and scrubby, useless for anything other than grazing for hill farmers. The sheep don't seem used to trains as they and the new born lambs gambol away as soon as we pass. There are also a few wild deer who also don't like our passing much, but they are more dignified as befits their status in Scotland.

At Dingwall the coach party were loaded on the train. Judging from the accents they were from the London area. Several started moaning before they even sat down and very few paid much interest to the world outside other than to get excited when they see their coach on the road alongside the track at one point. Presumably the trip was to Kyle and the train was just a novelty rather than a serious means of getting to a destination.

The best scenery is from Strathcarron onwards as the line joins the water. It snakes

alongside the cliffs hanging on grimly at some places. The view across the estuary is fantastic even if the trees make it difficult to photograph in places. You'll have to imagine looking over the water and small islands to the mountains in the distance. It's like a God ran down the check-list of interesting scenery and ticked the lot.

At Duncraig, Mark from the Friends of the Kyle Line (President: Charles Kennedy MP) pops up and tries to flog a pack of information along with entry to the museum in the station. The coach party weren't that interested but I paid my £3.50 and received a certificate, letter and information poster in a plastic wallet. 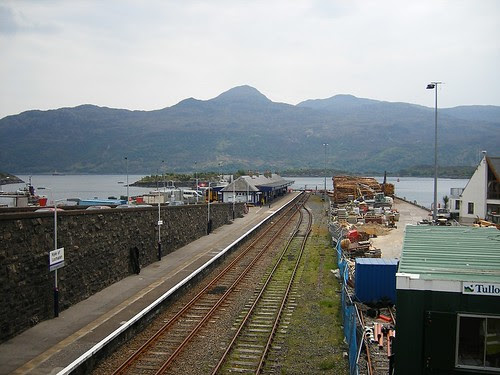 At the station, which is a typical Highland wooden structure albeit a bit longer than usual, the is a tiny museum and gift shop. The Friends are trying to restore the signal box at present as well as being committed to promoting the line and trying to keep it open. Over the years there have been many attempts to close it down. Hardly surprising as all the scenery must come at a terrifying price to First Scotrail. Luckily for us all attempts have failed and nowadays it would be very difficult to find an excuse. This won't stop the accountants though, so I wished the Friends the best of luck.

Beside the station, where the fish vans would once have stood is an enormous pile of wood. We'd passed through forests full of tall, spindly pine trees. It has to be remembered that these are as much a crop as wheat is elsewhere. The trees grow and are harvested. The few branches that exist (close planting means there is little greenery other than at the very top) are removed, the trunk saw into prescribed lengths and the the logs are carried down on lorries to the harbour where they are shipped out. This traffic used to go by rail and still does in some places but here it's boats.

Kyle isn't a large town but at least half of the shops cater for the tourist trade. One of the busiest is Herbert's Place, the local chippie. I had promised myself that I would get a proper chip-free healthy meal but the lure of that seaside tradition was too strong. I wasn't the only one either, plenty of people were sitting looking out over the water at the Isle of Skye. Anyway, you should always support any business with a pun in the title shouldn't you ?

The shop was busy so I did a circuit of the town after sticking my head in the door thinking it would quieten down once the rush of new trippers had died down. That happened, but not much. It was funny being behind a Yorkshire group when the request for a bread cake (bread roll) had to be translated for the proprietor. The lady then decided she didn't want chips as they didn't have any “scraps” either. Now I like crunchy bits in my chips but surely they are the icing on the cake rather than the main body of the feast. Some people are just too picky.

Anyway, I munched my delicious lunch sat on the breakwater watching a lorry driver unload his logs at high speed. The whole process took less than 5 minutes using the crane built on the back of the lorry. Afterwards, on the recommendation of Lonely Planet, I washed my hands at the local toilet which is home to the largest collection of whisky bottles in any public convenience – but then that's not much of a record in my experience. Still there was plenty of decoration lovely out up by the attendant so I suppose this counts as an experience.

The original plan was to stay the whole afternoon but looking at the timetable I realised I could grab an earlier train and get some time in Plockton. 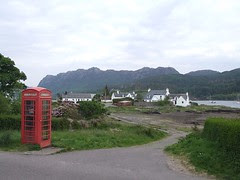 This little village is best known for being the place the TV series “Hamish McBeth” was filmed at years ago. They don't seem to mention this anywhere and I don't blame them – once you get over the fact that the station is 20 minutes walk from the village – it's a beautiful little place. A row of stone cottages around the edge of the bay. There are no less than three red telephone boxes, one of which is high up on a hill. Just the thing for the visitors of whom there are many judging by the tourist friendly shopping available. Most of the shops do other things but one little on in the middle of the row seems only to sell tat, and not tat unique to Plockton, so I guess this doesn't open in the winter.

The return train was a lot quieter than the one out. The coach party had been bussed off at Kyle, possibly over the bridge to Skye in the manner of Americans “doing” Britain. They missed the scenery which had changed as the sun moved around. I'll admit the fresh air and gentle motion of the train meant I missed a bit 'cos I dozed off but it was worth it.

More pics, with captions, on Flickr
Posted by Phil Parker at 10:53