I've always been fascinated by maps, Some place names have me wondering what they are like and I feel the need to make a visit. Years ago I ended up on a tube train heading out to Chipping Ongar simply because it was at the extremity of the underground map and the name was shortened to the amusing sounding “Ongar”. As far as extremities go though, you can't beat Thurso. Try and go any further north in this country and you'll get your feet wet as you've run out of island.

The trip is not easy either. OK so all you do is sit on a train but it's a 4 hour journey. From Leamington I can get to most of the country in that time. A trip of this duration needs planning, especially as the train left at 7:15 in the morning. That's before breakfast so I didn't even get my bacon & eggs !

My heart sank when the train seats were dotted with reserved tickets. The demand wasn't as high as yesterday and I found a berth without trouble but wondered if we were due to be visited by another coach party.

The run out starts quietly enough, the first few stops are the same as the trip to Kyle. We soon diverted to new territory at Dingwall and picked up the coast of the Cromarty Forth for a while, The whole thing got very Scottish at Invergordon. In Nigg Bay there is an oil platform of some description on one side of the train, and piles of barrels from a whiskey distillery on the other. Both of the country's main exports in one place !

Station names provided some fun. I like the sound of Fearn, but loved the way that in the highland accent employed by the on-board tanoy system, Tain sounds like “Ting”. Not all the stations are stops, if you want to get off you have to tell the guard or if waiting on the platform indicate to the driver clearly, he slows down to walking pace on approach in case the brakes need to come on.

As befits a proper traditional branch line, each station has it's own character. Sadly, many are closed and some boarded up as the small number of passengers don't really warrant a permenant staff at each. Others have been sold as private homes and are well cared for. The owners often “accesorise” their homes with platform barrows and other railway ephemera. An extreme case is found at Rogart where a small railway museum has appeared. The are a couple of coaches and a diesel shunter (Trainspotter note: Ruston 48DS, I only know this because I once built a model of one).

On the train were a couple of cyclists who were setting off to John O'Groats and then to Lands End from Thurso. Their bikes were in large cardboard boxes in the cycle section so when they got off their first job involved spanners and some serious assembly. They'd come up from Kings Cross the day before and planned to complete the trip in 12 days including only a single day of rest. Luckily the weather was good for their starting with bight skies and no sign of rain or serious wind.

The coach party turned out to be a group from the RSPB who were looking at a new reserve over 40,000 acres in size in the Highlands. Their talk was of birds they had seen on the trip up and the sighting of a harrier (not the jet powered variety) caused much excitement with binoculars appearing from nowhere as they raced across the coach. Chatting to a couple of them I learned that the forestry industry isn't as “Green” as I'd thought. Apparently the stubbly mess left when the trees are cut down doesn't provide a particularly useful habitat for wildlife and that that trees themselves take all the goodness out of the land. Of course this has to be balanced against the employment opportunities provided in an area where jobs are scarce but land plentiful. 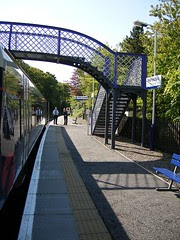 Dunrobin the sea appeared. In the sunshine it really shone. The beaches were either black and rocky or golden sand devoid of sunbathers. For s few miles we traveled along the coast until the half-timbered Dunrobin Castle station was reached and the tracks headed back inland.

At Helensdale the train stopped for a while to wait for another train to pass, Most of the passengers hopped out onto the platform to stretch their legs. 4 hours is a long time and Francesca our catering host certainly did good business with the trolley catering. Her captive audience hadn't all brought mountains of food with them and we all fancied a cup of tea during the run.

After this the landscape became desolate moorland. Although you could see for miles the colours were muted other than the bright yellow flowers on the gorse. This went on for over an hour too - that makes for an enormous expanse of wilderness. On one hand this makes for potentially boring viewing, on the other seeing such a huge area of nothing is strangely affecting.

The first sign of arrival at Thurso is a massive graveyard on the hill. It's recently been 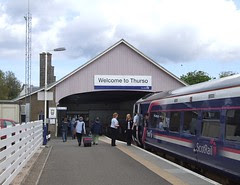 extended too which doesn't bode well for the local population. The station is a tradition highland covered train shed structure which our train parked outside of. I suspect had the weather been less than spectacular we might have been inside as the designer intended. That “Welcome to Thurso” sign on the roof marks journeys end and must be a sight appreciated by a lot of travellers over the years, especially those from Edinburgh or even further south.

For a town by the sea, Thurso certainly hides the water well. I wandered along Princess Street and through the town for 20 minutes before finding it. Even then there isn't as much there as I'd expected. OK, so you get a little beach with stones, seaweed and sand but no boats of signs or maritime industry. On the beach I chatted to a lady chucking stones in for her slightly reluctant do go fetch back out. He only had little legs and obviously wasn't too keen on the tiny waves rolling in. Thw ater had the unforatunate effect of giving him a perm too. Perhaps his reticence is because this this isn't a fashionable style for pouches ?

The shopping centre isn't large. The only national chain is a Woolworths (not even a WH Smith) but there is a pleathora of small shops which impart a character than many larger places simply can't hope to match. One thing that makes me wonder is the huge number of businesses involved with hair. Barbers, hairdressers, I would say that at least half the proprietors want to fiddle with the top of your head. Best of all, there is a model shop ! OK so not a big one but that's one more than central London can muster.

After a delicious lunch of lamb sausages and mash at the Bistro on the corner, I wandered back to the station via the art gallery and a couple of charity shops. One thing I hadn't planned properly for was reading matter. My copy of the Scotsman didn't entertain me for the duration so I picked up a couple of second hand paperbacks to do the job properly.

After Thurso it makes sense to visit Wick. Surprisingly this feels like a slightly bigger tow 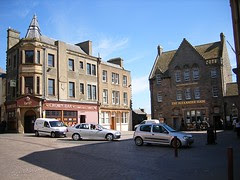 n even though it isn't. It too has a Woolworths and a Wetherspoons plus all the same shops you find 30 miles away. In out of the way places like this, local chain stores emerge. There is a travel agent that I've seen in a few but never in a larger area where presumably the national chains take over. Local charities seem to pop up in both places too and if I'm being fair, make up a significant percentage of the shops. Mind you, it's a long way to go for a major centre so they probably provide a very useful service to the community recycling goods that you can't easily acquire locally. The highlight of the visit was the discovery of a new variation of the famous Empire Biscuit. This version has toffee in the centre instead of mock cream. A discovery of this type can't be underestimated. It's like finding a new shape for the wheel. The lady in the shop told me they are very popular too. Mind you, at 3pm there were more of these than the conventional version, make of that what you will...

Students of architecture would love the stone built buildings. You don't see any brick here. There is a similar air of solidity to may of the structures, especially banks. I doubt you'd see that nowadays but 100 years ago the institutions wanted an air of permanence and that meant proper materials.

It's often sad that the journey back is shorter than the one out. This did seem the case even though the trip from Wick involves running back to Thurso on the way. Perhaps it was because I buried my nose in one of my books, a slightly trashy sci-fi novel which in a pounds per page was excellent value. I was pleased to have planned ahead enough to bring refreshments too as no trolley passed through the carriages this time. Surely a missed opportunity.
More pics, including the doggie, on Flickr
Posted by Phil Parker at 03:09