Leaving Inverness for Aberdeen the countryside was much lusher than had been the case in the north. Although there were still mountains on the horizon the foreground was much like that nearer home. Cattle largely replaced sheep and the typical Scottish stone farmhouses have the sort of tin sheds that you find everywhere else added to the plot.

Arriving in Aberdeen the first impression is that there station is quieter than Inverness. Wanting to drop off my rucksack I hunted down the left luggage office. The surprisingly French porter didn't seem to know where it was and after wandering around the concourse for a while I gave up and headed out. The office is outside. Ignore the signs, it's on the station frontage nowhere near where you'd expect to find it. 2 quid and a search of the bag later and I was heading toward the docks. The city is built around it's docks like no other I've visited. A couple of minutes stroll from the station and I'm looking at ships. My first impression was “B****y hell those are big !” (I really do think in asterisks to avoid offending myself). What I'd found were at least 5 stories high and that was above the decks. They were so tightly packed in the dock that you couldn't actually see the water. The decks were nearly level with the quayside and you could step on if the high metal fence around the site didn't prevent you getting in.

Having found the docks I quickly found the maritime museum which is excellent. The displays centre around a huge model of an oil rig. With the city economy running with the stuff it's not surprising the museum majors on it. However there is also a health dose of fishing history too, The quality of displays are excellent and I found them really interesting. OK so there weren't that many people in so getting at exhibits wasn't hard. I did manage to get in trouble though when I took a photo of a diving suit having missed the tiny notice at the entrance that said you weren't to take pictures. I really don't know why as you aren't doing any harm and none of the exhibits can hold an intellectual property issues. And if you are going to ban people from pictures, sell more postcards so we don't need to bother. There are some lovely paintings of ships on show and only 2 reproductions are available.

Leaving the museum and heading to get some boat pictures I was shooting through the fence when one of the workers let me in to work a bit more clearly. We chatted boats for a bit, he confirmed my guess that the vessels in dock were oil rig support ships. Despite dwarfing everything close by it was pointed out that they in turn would look tiny beside the platforms at sea. From the model in the museum it's obvious how huge these structures must be. Watching a film explaining the training required for those heading out there I think that I'll not be checking them personally.

Times have changed and the city is still catching up. Around the docks there are dozens of pubs. Proper dives that you can imaging your 1950's sailor or stevedore spending his wages in. The sort of place where Para Handy would have enjoyed a quick dram or two. He'd have noticed that there were a number of business opportunities if you fancy 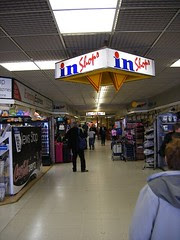 running one or two or more. In fact the whole area looks like it's due for reinvention as the grey warehouses are standing derelict too crying out for conversion into des-res flats. Mind you they won't be too keen if they want to be close to the centre. I took ages to find it. On the way I tripped over the indoor market which is properly scruffy and run down and as vibrant as the best of the, Plenty of haberdashery, mobile phones and a cafe selling Mince & tatties with free tea.

One exit takes you to the main shopping centre but I didn't find this and wandered around for a while, eventually I made it and it's not bad. The best feature by miles is the Disney Cinderella's castle at one end of the street. Not sure why it's there or why they built it from the same grey stone as everything else rather than pixie dust, but it's a nice touch and certainly stands out. The art gallery is pretty nice too. Like the maritime museum it's free to go in, which is always good. Unlike most galleries it's full of moder n sculpture. Most of is pretentious rubbish but in amongst the arty stuff there are some really impressive ones. I just can't get excited when an artist has an idea and then someone skilled does the work but gets none of the credit. Some of the work was by local silversmiths – my favourite was the teapot and sugar bowl fitted with wheels. Great cartoony stuff with real humour so often missing in the art world.

My plan was to head off to Edinburgh and I back at the station I caught the train to Kings Cross which was nice an quiet. That could be because it was a proper HST with lots of coaches. Despite being over 25 years old it was still the most comfortable ride I've had all week. That tells you something about modern design and the requirements of operating companies (Thank you John Major).

Out of Edinburgh we passed swathes of what looked like council houses. No stone here, just lots of prefab structure which I don't think will a last quite as long as the older stone ones, but then they were doubtless cheaper to build.

The line hugs the coast for miles and with the perfect weather we could watch the boats heading off to the rigs. Even from a distance they are pretty impressive. Plenty more beach for those who can brave the cold and don't mind black seaweed. The highlights of the trip involved bridges. On the approach to Edinburgh we crossed the Forth Bridge which is as impressive as it was before. However I think the Tay bridge is pretty good competition. One of the problems with the Forth crossing is that the bridge looks great when you see it from the bank but travelling across apart from the hight there isn't much to see apart from supports blocking the view. On the Tay you are up high and over water but the trip lasts a lot longer. A lot longer. In fact you can't believe how long this bridge is as it seems to go on forever. I managed to forget all about the disaster a hundred years ago too. Nearly.
More pics on Flickr
Posted by Phil Parker at 04:16

How are we looking at the paintings of Mark Rothko these days?
Is he old hat, replaced in America by more contemporary concerns? Looking at his minimal canvases and their enticing floating squares of subdued paint live at the MOMA recently, I had to stop to wonder whether he still communicates to a modern and younger audience.
Wahooart.com, the site that sells good canvas prints to order from their database of digital images, has many Rothko prints. I ordered this one, Blue and grey, http://EN.WahooArt.com/A55A04/w.nsf/OPRA/BRUE-8BWU7F, that I have now hanging in my study. I can spend a long time looking at this elusive image that takes me to some other place not in this world.