My final hotel was special. Special in that it was the most expensive nights stay I've ever paid for myself. £97 for bed & breakfast at the Belford Hotel. In comparison, the first night at the excellent Regent House Hotel cost £27. The choice was forced on me thanks to Edinburgh Marathon occurring the same weekend. Getting a room anywhere in the city was pretty much impossible, especially since I needed to be within walking distance of the station.

The room was as nice as any commercial style hotel is. Spacious and clean. There were a couple of issues though. The first was that every time I flushed the toilet the handle lost connection to the flush mechanism. So using the loo had to be followed by a call to reception to get someone sent up to fix it. And the shower was, a shower. Hopeless, with a weak dribble coming out of the head. Compared to the pummelling I got in Inverness this wasn't impressive.

My plan had been to make up for the expense by eating my own body weight in breakfast. At least that would save getting lunch on the run home. To be fair, for the first time during my trip, haggis was on offer at the buffet. Good news as I like fried haggis - but not this stuff. I'm not sure what was wrong but it tasted weird. The rest of the food was fine if a bit on the bland side. I even tried a vegetarian sausage but that was like eating compost so it was given up as a bad idea. On the plus side, the teapot didn't dribble.

Oh, and they charge for WiFi - what's that about ? 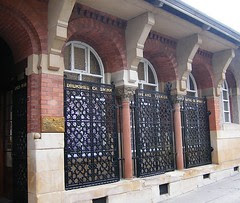 Hiking (best word for it, think half an hour walk. The hotel is in the back of beyond) back to the station I passed the Drumsheuch Swimming and Turkish Baths company. Perhaps I should have booked there for my ablutions. Excellent building though.

Princess Street is a bit chaotic at present. There are a lot of roadworks in preparation for the new tramway system. There is a lot of pride in this, or at least a lot of stands explaining why it will be A Good Thing. Comparing the street with a vintage photo in a magazine I bought for the trip, there is a lot less traffic already so I wonder how much difference the trams will make. Hopefully this busy street will become easier to cross as it's a nightmare now ! 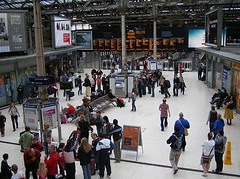 Edinburgh station was very busy. I'd expected it to be quiet on a Sunday morning but apparently it is the place to be. My train arrived and fortunately was pretty quiet. With the seat reservation system not working I just grabbed a spot in the quiet coach and relaxed. The run south was as easy as could be. The weather gradually got worse as we neared Birmingham but I didn't care much. The two lads who had got on at Crewe and sat nearby did though. Their tracksuits weren't going to protect them much and they hadn't brought anything more suitable for the conditions. In fact apart from mobile phones they didn't seem to have brought anything. At one point we briefly stopped in the countryside and one asked me if I knew why we had been held up. I'm not sure why I was thought to be an expert on this or what information I might have that he didn't at that point.

A couple of stations before Brum a mother sat down with her two kids. They were fractious but no problem to me but the boy was slightly unnerving. He was singing a song that started off:

We are the boys.
We know what to do.
Take all the girls.
And flush them down the loo.

He ran through this a couple of times and then added:

We are the strong.
We know what to do.
Take all the weak.
And flush them down the loo.

We are the beautiful.
We know what to do.
Take all the ugly.
And flush them down the loo.

Anyway, once at New Street a quick and damp stroll took me to Snow Hill. I remembered just in time that I needed to buy a ticket (force of habit, I normally have a return half at this point) for the Marylebone bound train that brought me home after an enjoyable trip. Stepping onto the platform I bumped into a friend who was busy packing her boyfriend off onto the train I'd just got off. Strangely she didn't seem to want to chat about my holiday...

To be honest I should have done this years ago as it's a fantastic ride and I've seen some beautiful places and met interesting people. Time to start planning the next one I think.
As usual, photos on Flickr
Posted by Phil Parker at 07:21