Nothing beats a good breakfast on holiday. To make things better, the owner of the hotel offered to give me a shout when the spawns of Satan (TM) had finished throwing food at each other. There is no need for decent people to be stuck in a room full of kids and I'm sure the teachers will appreciate the lack of witnesses while they controlled them. Besides, breakfast means sharp objects will be to hand and it would be such a shame to get blood in the fruit juice.

Anyway the food was good and well cooked, the tea was nice and I got Frosties as cereal. Let's face it, it's not food for grown-ups but sometimes you have to live a little. For a real rush there were even sugar cubes complete with proper tongs - how posh is that ! For the mechanically minded there was even a dumb waiter device added its clunks, groans and flashing lights to the morning atmosphere.

With time to kill before the train I walked along Princess street window shopping. Being used to Midlands townscapes the solidity of the imposing stone built shops with carved names is a startling contrast. How they manage when the business changes I don't know as those signs are there for centuries. Mind you some of the shops appear to have been there since William Wallace so perhaps it doesn't matter. There is an air of permenance an an attitute that says these things are just so. After all, the Queen might drop in at any minute and you would want her to feel at home wouldn't you ?
At the other end of the street, in more ways than one, there are the souvenir shops. None of these seem to employ anyone who looks that Scottish. I especially 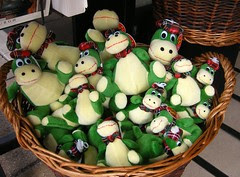 liked one owners tartan turban along with his Chinese assistants mini-kilt and biker boot combo. Quite how I resisted buying a set of mini bagpipes is something I don't understand but something my neighbors will be eternally grateful for.


Back at the station I arrived early and bagged a seat next to the bike rack on board. This might not sound like a winning move but it is a seat on its own, had space for my rucksack beside it and best of all gave me two whole windows free of passengers heads to see the view.

Soon after we set off the train appeared to be flying. How we had managed to get up so high over water confused me until I spotted a bridge on my right. We were on the Forth Rail bridge and it is fantastic. Although the image is iconic you simply don't realise how high or long the structure is. On one side we had the suspension bridge carrying the road crossing, on the other a pair of huge ocean going tugboats looked like models. Had the train stopped at Queensferry station I would have been very tempted to get out and have yet another look. As it was a quick glimpse appeared as we rounded the bay at Burntislast. Sadly this was too quick for me to get a photo and even if I had, the covers for the legendary painting obscured some of the massive pillars which didn't help the view.

On the train we all settled into our seats. Simon our “catering host” turned up with his trolley to sell us drinks. He was so tall he had to duck down through each doorway he passed through. I suspect that catering hosting isn't his dream job due to the slight air of embarrassment that followed him as he navigated the bags littering the aisles but he did OK and had a better success rate than many others I've seen doing this job.

The scenery defies description. Streams with wide stoney beaches where the water has meandered over time, scrubby hills with gorse and the odd cow, waves of pine trees, we had the lot. Isolated houses popped up occasionaly and I wondered who would chose to live so far from any form of civilisation. Often there was little in the way of farm building on the plot either. In May I was really surprised to see so much snow on the hills too. Not enough for skiing perhaps but more than we see in central England most winters.

If I thought the houses were isolated, we passed the most remote chicken farm in the world as well. It suddenly appeared from behind some trees looking for all the world like a wartime prison camp in miniature. Those who have seen the film "Chicken Run" will have an idea what I mean. The owner or carer for the birds was a mystery though as we were miles from anywhere. Mind you, I didn't see any chickens either so perhaps they had dug a tunnel and escaped already...

The stations are lovely and almost Alpine in design. Signs in English and Gaelic which is nearly as tough to read as Welsh. Aviemore is oddball though. On one side there was a pleasant enough building, on the other a set of run-down structures with faded paint (antiques people would call this patina) that belong to the Strathspey Steam Railway. Judging by the amount of un-restored rolling stock they own it's a young line and one that can't reply on many local volunteers either. A steam engine (BR liveried J94 for gricers) was outside the brick built shed and being readied for use. The weirdest feature though, was the buffet on the proper station. Who deiced that somewhere this remote was the place for Roosleap, the down under eating experience ?

To entertain us on the run, we had a toilet. Not that exciting you might think, but far from easy for most of the users who waited outside for the door to open or looked for a door closing button once they had finished. One girl even tried to haul the door back into position, thinking perhaps that the designer meant this to be the way things worked. I'll be honest and admit that I got tired of trying to explain the door to people very quickly and just let them get on with it. Since most were elderley Americans with weak bladders practice soon made perfect.

My companions at the entertaining end of the coach were Cameron who was heading up to see family and Heidi taking here incredibly well behaved 6 month old son to see Grandad. We chatted away every so often and Cameron advised me that his sister runs a B&B in Inverness and then backtracked as I misunderstood thinking that he was trying to sell me accommodation !

On arrival my plan had been to head straight to the guesthouse but the Victorian Market diverted me. It turned out not to be an indoor market but an odd shopping centre with souvenir shops rubbing doorways with a purveyor of vacuum cleaner spares.
Inverness isn't a very big city, in fact it's smaller than many large towns. The Winston Guest House is about 5 minutes from the station and that includes crossing the river 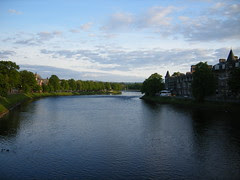 Ness (no sign of the monster). I haven't seen the inside much yet as my bedroom is at the bottom of the garden. Not a shed but a little building with 4 or 5 rooms all nicely appointed. The owner showed me around and probably didn't need to tell me that he'd had the floor in the bathroom replaced a few days ago. I will tread carefully.