Caernarfon and the Welsh Highland Railway 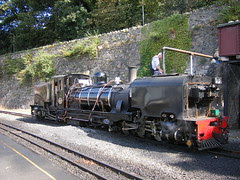 Time for an admission. My trip to Wales is all about train spotting. Well spotting a particular locomotive anyway. That locomotive is one designed by Garratt and hardly used in this country. I won't bore the casual reader any more than normal by explaining what is so special about this design, suffice to say I've always been fascinated by them. A few years ago the Welsh Highland Railway decided to re-import some Manchester made examples from South Africa to run the new (OK, reinstated) railway from Caernarfon to Porthmadog. This runs through the Snowdonia National Park, an area known for being hilly. Garratts are designed to haul heavy trains over steep and windy tracks - just what we have here.

For technical details, go to Wikipedia

Of course the first thing to do is get the right Welsh Highland Railway. On arrival at Porthmadog station you see the Welsh Highland Railway just over the road. However for Garratt spotting you need the Welsh Highland Railway (Caernarfon) - a company set up by the Ffestiniog Railway which the line will eventually join. The other WHR will form a branch line to this. I think there was some argument when the scheme was first proposed but by the time all the lines are finished the area will have both a major tourist attraction and useful extra transport infrastructure.

Looking at the map I had two options, get to the main station at Caenarfon or the nearer option of Rhyd Ddu. The later needed two buses. Both little ones. And both to places I couldn't pronounce. On that basis I went for the easy but longer option - at least I can say Caenarfon even if I have to look every time I type it to get the right spelling !

According to the helpful tourist information people the bus left from Tesco at 9.15. Not being sure which side of the road I needed I was examining the stops half an hour early when a lady in the shelter tried to help. "THE BUS COMES AT QUARTER TO NINE" she told me in the manner of someone who needs to turn the sound down on their headphones. "The one to Caenarfon ?" I asked. She replied something about the Pwllhei bus going there. "Caenarfon, the one with the castle ?" I checked since I'd not understood what she said and was beginning to think she was more than a little mad. This was confirmed when it became apparent she didn't know of the castle or believe it existed looking at me like I had fallen out of the sky. 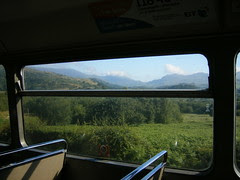 The bus driver said I needed the other side of the road and at 9.15 a double decker turned up to take me. £4.50 return. Compared to fares around Leamington, this is a bargain. It's a hell of a ride too. The top deck of a bus has always been a fabulous place to see the world from but when the scenery is as impressively lumpy as this. The driver has a real challenge to navigate around the narrow and twisty roads.

The station is more than a little basic and when I arrived - empty of trains. A short stroll and an ice cream later the carriages had arrived, complete with the much anticipated Garrett locomotive. Tickets for the trip are a whopping £17.50 return or a rover covering both WHR's and the Ffestiniog comes in at £34. That's a saving but not as impressive as it sounds - the standard ticket allows you to ride all day, the rover only covers a single return trip on each line. For most people this is fine but an enthusiast is likely to want to travel behind both the engines in use yet are just the market the "rover" is aimed at.

Gricers may wish to watch the loco taking on water on YouTube.

While on the subject of ticket prices, for an extra small fee you get to travel first class. Nice if you want bigger seats and posh tables in the fax-Pullman coach. Everyone else sits in perfectly normal coaches except those hardy souls like me who pick the open sided vehicle. Well it's behind the loco and the weather is lovely so why be shut away ?

For the first half of the trip I wondered if for anyone who just wanted to enjoy the scenery , the bus would be a much better bet. Then we made it into the mountains. Even our powerful locomotive struggled a bit only able to maintain a walking pace for some sections. The American couple behind me started rushing from side to side grabbing photographs. Streams, fields, heather covered glowering mountains and hills rolled by. With no glass between us and the outside world you really feel part of the view and not just a mere spectator. 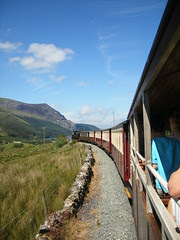 Rhyd Ddu is the current southern terminus of the line. For those who don't speak Welsh, the name means "Arse end of nowhere". It's a temporary end point and there isn't anything to do other than take photos and wait to get back on for the ride back. You can see Snowdon so it's not all bad. There are defintly worse places to be stuck for half an hour, at least when the sun is shining.

Entertainment on the return leg was provided by a family group who delighted in a couple of their number who were chasing the train in the car. Every couple of miles they would be waving from the lineside and received a great cheer for their efforts. It was the only consolation though - this was a seriously prepared party with enough food to keep a small army going. Granddad seemed to be concerned that the youngsters were going to fade away during the trip judging by the number of sandwiches he plied them with.

And there was Frankie the dog. A lovely friendly animal. I spent plenty of time trying to guess his breed only based on his funny little legs only to discover he was the result of a liaison between a beagle and a retriever.

Caenarfon is a lovely little port. It has still got an enormous castle whatever woman at bus stop may think. The square is currently dominated by a giant Ferris wheel and has been joined by a mobile PA system. Lunch was enlivened by a band doing covers - from Chris Rea (Road to Hell, interesting choice for an opening number) to some 60's and 70's stuff. They weren't bad but a bright sunny afternoon with a crowd isn't that conducive to a great performance. You want a seething mass of fans jumping around, not a motley collection of bored kids, tired tourists and grannies. 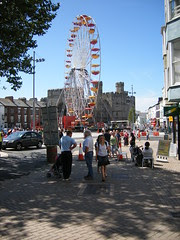 Yet again the chains had made little impact on the high street which, for a change, is a nuisance. Thanks to a drippy ice cream I was in the market for a new polo shirt. But could I buy one ? Where do the Welsh buy clothes ?

No double decker for the ride back - this time a truncated single deck bus followed by a normal sized version that was so new the smell of unsquashed upholstery was overpowering. The mountains were starting to disappear behind wisps of cloud that only served to make them look even more appealing. At the end of the day I can't decide which is the best way to see the view - but then if you are on holiday, why decide when you can have both ?

More pictures on Flickr
Posted by Phil Parker at 11:43

If you walk (3 mins?) to Rhyd Ddu village - there is a cracking real ale pub (and oddly a pizza takeway at teh same place) plus a lovely tearoom. The walks from there are well worth a look too. PS I'm building a model of Rhyd Ddu in 009 so I may be a little biased! http://rhydddu.blogspot.com