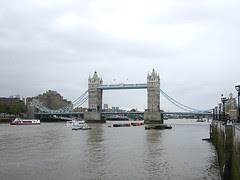 If ever there was a landmark to represent the south of England, this is it. An iconic image, known around the world, and a bit fake 'cos it's covered with stone cladding.

Let me explain. Tower bridge exists in its current form for a simple reason. At the time it was built, any river crossing on the Thames needed to provide for sailing ships to access wharfs upstream. Hence, the bridge either had to be very tall or open to clear the masts.

The way it does this is very clever. A pair of steam engines pressurise a pair of accumulators (a water reservoir with heavy weights sitting on top). When the bridge has to open, the accumulators power engines that open the road way (bascules for techies). The complicated system is needed because the steam engines couldn't open the bridge fast enough on their own but they can store enough energy to do the job. The building is really a big machine - a bit like the Laxey wheel - with decoration. It's internal structure is steel and to make it look prettier the who thing is covered with stone embellishments, much like many houses around the country...

Anyway, all this stuff is explained if you visit the exhibition in the tower, it just takes a bit of time to get there. The entrance is at the base of one tower where a badly designed foyer slows you down. 6 quid gets you in once you've been frisked and had your bags x-rayed. Then a photographer takes your photo, "just for fun" - he wasn't impressed that I refused. Once the lift is full, visitors are conveyed to the top of the tower.

A short film with (surprisingly) some of the cream acting talent in covers a bit of history and most people sat through this politely. The real reason most make the trip is the view from the walkways. Originally conceived as a way for foot passengers to cross the river when the bridge was open they are now glazed (hooray, it was raining when I went) and have a slight duff display explaining what the Victorians did for us. Why anyone cares when farm laborers got the vote when they are in a great example of the engineering of the age I don't know but the British way is to pretend that the technical stuff is too difficult. There were some nice pictures of the construction but the multi-lingual captions were never more than 2 lines long. 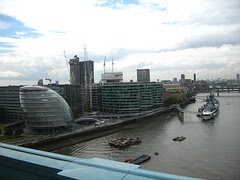 The view is worth the trip though. From one side you can see the City - if the clouds aren't blotting it out. From the other, city hall, HMS Belfast etc. A nice touch are the sliding hatches for cameras to be poked out of - there are even ramps to help the shorter tourist up to some of these.

Less clever is the stand from the photographer who took the pictures in the entrance. Your image is superimposed on a background of the bridge - and you can buy a copy ! Woo and Hoo I say. It's not like anyone visiting London owns a camera and couldn't just take a picture themselves by, ermmm, standing in front of the bridge and pressing the shutter.

Once you've been down the send tower, a further delight awaits. Included in the admission prices is a visit to "The Engine Room" - just follow the blue line painted on the pavement down under the approach road and you get some proper engineering. One of the steam 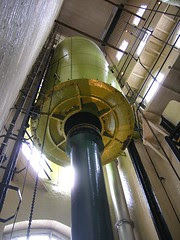 engines is on show with numbers to explain what the various bits are (good) the other is rotated by a motor and lit by infuriating flashing coloured lights for no good reason (bad). Further on the accumulators and various other bits are displayed for marvelling at by the tourist. I liked this stuff but then I love heavy mechanical things and seeing how machines work. The explanations were pretty good with excellent diagrams to cover a fairly complex system.

At the end, obviously, there is a souvenir shop. It's not very good although you can buy two "Make your own Tower Bridge" kits and no end of books explaining what the Victorians did. To be honest though, the tat was the same stuff available anywhere in London. Am I alone in wanting nice location specific junk ? At least that way you have to actually visit the place rather than just raiding the shop in the duty-free on the way through the airport.

The pavements of London are hard. I mention this only because I decided to sit down and read the paper for a while after leaving the Tower exhibition. A few clues into the crossword there were some boats horns blaring - I looked up and the bridge was opening to allow a replica Las Vegas showboat to pass which finished the visit very nicely.

Tower Bridge on Wikipedia
Posted by Phil Parker at 03:54