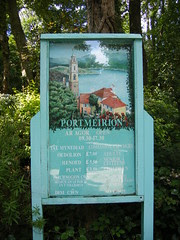 Warning: If you are expecting a tirade of "Prisoner" puns then go elsewhere. This is serious blogging, not some bit of fluff. Anyway, I never understood the series so I refuse to conform to your expectaions as I am a free man...

Everyone has heard of Portmeirion. It's a world renowned tourist attraction, a make of pottery and the location for a TV series. I had half a day spare and thought it would be daft to pass up the chance to see what the fuss was about.

Getting there sans car meant a trip on the smallest bus I've every been on. Actually it's a fat van rather than a bus but the effect is the same. Turn up at the stop, pay the driver and get on board. I was the only passenger and apparently this is often the case. People prefer to visit by car, presumably hoping to take away mountains of that lovely pottery. The driver was chatty and we talked about holidays and difficulties trying to book hotel rooms. I related trying to get into Edinburgh at the same time as the marathon, he topped that by trying to get into Dublin when the 3 Nations Rugby was on. 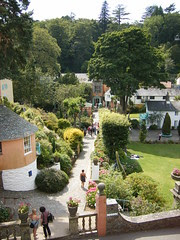 For the history, try Wikipedia. In a nutshell though, Sir Clough Williams-Ellis, wanted to try his hand at town planning and created this village from his own ideas moulded around old buildings that would otherwise have been lost. They were imported to the estate and eventually incorporated into his structures. The idea was to turn people on to architecture and allow them to experience the fun side. The village is a real place though, not a film set. Several of the buildings are lived in as evidenced by the bins and recycling boxes outside.

The Village is reached at the end of a windy wooded road. It's really tucked away in the trees on the side of a hill so you don't see anything at all until you are there. First negotiate the ticket barrier (£7 per adult) which isn't anew feature - to stop overcrowding from visitors a 5 shilling charge was levied many years ago.

You then walk through a gate and into the village proper at the top of the hill. Two things strike you immediately - first how bright and colourful everything is. I had an excellent sunny day for my trip and have never seen such a collection of coloured buildings. The second thing is the size - the centre would fit on a decent sized playing field. Portmeirion reminds me of a model village despite everything being full sized. It's obvious that the plan was to bring lots of elements that wouldn't have naturally been found together in a settlement to one place. 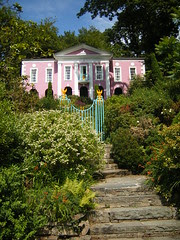 In the centre are fountains, around the edges, clinging to the hillside you find buildings and a few steep paths. Tucked away on one side is a house with a film show explaining a bit of the history as told by the man himself. While not the greatest film (too many stills to music, also too many bored kids) you start to understand the reality of what you are seeing. For example, there is a fantastic purple mansion that is only the size of a bungalow inside - it's all front and build into a steep hill restricting the space behind. Other pieces of old buildings, such as columns, have been included in new structures. Many serve no purpose whatsoever or have had to find a use. The domed building is currently a gallery but only exists to counterpoint the spire on a nearby tower. 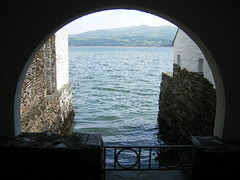 A short, if steep, stroll gets you down to the water which is wonderful. One building has a small inlet to house a boat (apparently used in the TV show I'll not be mentioning). Not special in itself but the noise the lapping water makes bouncing off the stone walls is so wonderful I could have sat and listened to it all day.

Sadly, tourism has ruined the place. While the eye has a feast, so can the tummy since the are at least half a dozen different cafes on site. If a building isn't a cafe, it must be a shop. And all of these seem to sell a very similar range of high priced tourist tat. Sells isn't an appropriate word from what I saw either as there was plenty of looking and many bored underemployed shop assistants. The stuff was OK but there was so little variety. Only one did anything in the way of TV memorabilia, the others just retailed goods that could have been sold in any tourist town in the country.

Oh, and there wasn't a mini moke to be seen. Or big white balloons. Pity really as I'd have liked to see some of the visitors escape from them.

Portmeirion IS a nice place. I loved the buildings, I loved the quirkiness. I'd love to stay there out of season to appreciate it properly. Better still, I'd love to build my own - and I guess that is what William-Ellis would have wanted.

Official web site for the village

More of my pictures on Flickr
Posted by Phil Parker at 11:30