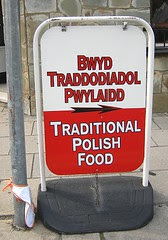 welsh sign
Originally uploaded by Phil_Parker
Before heading out to Wales along with most English people I'd always assumed the Welsh language to be an anachronism. At best it would be spoken by half a dozen old people, at worst those fluent used it only when they wanted to talk and not be understood by tourists. OK, so I knew all the official signs and documents were translated but surely this was just because of pressure on the Assembly from the Welsh nationalists who were desperate to pretend that the country next door didn't exist.

I was wrong. Welsh is everywhere, not just on official signs but on shops and billboards.

And people actually speak it. Real people. Checkout staff in supermarkets converse in Welsh as though it's the most natural thing in the world. They simply flit between English and Welsh at will. What's more the local tongue is the preferred option a lot of the time. I don't think this was just because I am English, it certainly didn't seem to be used with any "side".

I'm envious really. Being bi-lingual must be great. Watching children speak fluently is amazing. Definitely something to be proud of. While I don't think there are may who speak no English but I now understand the translation policies.

If you want to speak Welsh the BBC can help.

As an aside, this proves that with the right teaching, British people can be as fluent at Europeans are in more than one language. I wonder why we aren't ?
Posted by Phil Parker at 01:54

There is a lot of reasons because people in Britian don't speak other languages. The biggest reasons is of course is the dominance of the English language.It makes this country lazy.

But English is prevalent in Wales too so why does anyone bother to learn Welsh ?

My guess is that at home parents are bi-ligual and the kids just learn the lingo in the same way you pick up your main language.