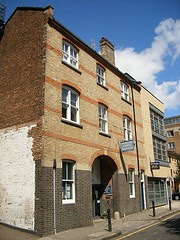 A few moments stroll from Kings Cross Station, just past the McDonalds, there is a sign for the Caledonian Canal. For the student of geography or waterways this will come as a surprise as the canal runs from Inverness to Fort William. In Scotland. And the sign is intended for walkers.

Of course this is silly. Follow the sign and you'll find roads with nautical names - Crinan Street, The Caledonian Road, Warfdale Road and most importantly, New Warf Road, home of the London Canal Museum.

The museum is housed in a small warehouse. Not a conventional one, but an ice warehouse. It dates from the days when ice was dug out of the Thames when it froze, and stored. Later a more reliable supply was found by importing the stuff from Norway. Below the museum are huge vats where the ice would have been stored and then transported on to the London gentry. Eventually methods to manufacture ice were developed but these were on an industrial scale so the warehouse continued to house the domestically produced product. In an era when ice production is within the capabilities of even the poorest equipped kitchen (although the recipe seems to elude people judging by the amount of ice for sale in supermarkets...) it's difficult to image a world when it wasn't available or so valuable you'd haul it across the sea.

Anyway, I pitched up just before opening time and had to hang a round a few minutes while the attendant opened up. He apologised profusely even though I was the entire queue and we were talking less than five minutes delay. I had to wait longer for the ticket seller on the Eiffel Tower to stop chatting on the phone to her boyfriend a few years ago - and I and the rest of those waiting were merely granted a sneer for our trouble.

So, what do you get for your 3 quid entry fee ? 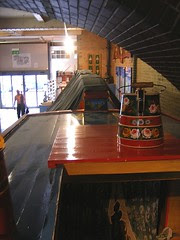 The ground floor is home to half a barge. It's a proper working, coal carrier type and visitors can explore the living area with it's clever woodwork and amazing use of space. This makes you wonder about the absolutely tiny area a family would exist in. I've read about the cramped conditions but only really understood how cramped by standing in the space. My VW Camper isn't exactly luxurious and it's only intended for short breaks but the volume isn't that much smaller than that available to a family for life.

There are displays covering the history of the building and the ice trade. Also old tools and machines for handling goods are displayed. Of course there is also a souvenir shop. Rather than being full of tat this is really good - a wide range of books on canals including history and navigation. Stuff for kids and stuff for grown-ups. Sensible prices too.

Upstairs there is plenty of reading to do. Lots of boards with canal histories. Each covers a different topic and overall the studious visitor would get a real grounding in waterway history. In one corner a series of films are running. These vary from ancient to modern - many date from the 1950's as far as I could tell and were film makers attempts to document a way of life that was dieing out rapidly.

There are a few cases of models showing the different boats used around the country. It's not often appreciated that canals were not the same everywhere. Midlanders will be familiar with narrowboats intended for a 7ft wide lock but on Norfolk and the North much wider navigation's made for wider boats allowed larger loads to be carried, more like the current European examples. 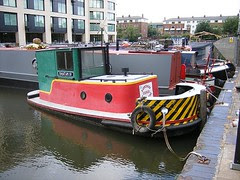 Out the back there is a wharf with boat moorings. I'll admit to looking at these with a degree of envy. It's a quiet spot considering the central London location, almost tranquil. OK you are overlooked on all sides by warehouses that have been converted to flats but living on a boat I expect you get used to be an object of interest. The museum owns a small Bantam tug which interested me a lot as a potential subject for a model. It's tiny and brightly coloured so appeals to the inner child and is pug ugly which appeal to the industrial artist.

If you know little about the waterways world but want to learn then the Canal Museum is a great place to visit. I reckon most people could go round in a couple of hours and enjoy the trip. Obviously if there is a special event taking place, there are several through the year, then all bets are off and you might be there all day !

Visit the website - full of info but terrible to navigate.

More of my pictures on Flickr.
Posted by Phil Parker at 11:30