With another cracking day beckoning and my train home leaving after lunch I had two choices, wander around Porthmadoc again or get a ticket to one of the towns further down the line and have a mooch. The trouble was, which town ? Not Tywyn as that is home to the Talyllyn railway and I wouldn't be able to resit a ride - not a god idea with a big rucksack ! Harlech was tempting but in the end I decided I wanted proper seaside. The sort of place you remember going on holiday to as a child. That meant (I thought) Fairbourne.

Cynics might say this was just an excuse to find another little railway and they would have a point. The first thing you see from the station and biggest attraction on the town is the Fairbourne Railway. The beach isn't far away though so I perhaps I could go and build a sandcastle.

The train was crowded with holidaymakers and their luggage. Despite being made up of 4 coaches, only 2 were in use as for many of the 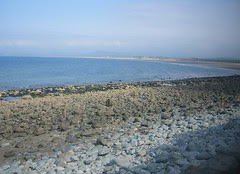 Cambrian line station platforms are too short for more than this. Because people are stupid and litigious everyone has to get cosy since you can't trust anyone to actually check there is a platform before stepping out can you ? According to one of the youths travelling if you look at some of the scenery near Barmouth and didn't know where you were, you could be in Florida. I could see his point, the beeches were golden in the sunshine as the curved around the bay. Florida isn't known for it's mountains or grey buildings but the sentiment was nice.

I don't think the local council will be chasing me if I say that Fairbourne isn't a big town. Pretty much everything is available within 100 feet of the station. As far as shopping goes there is a corner arcade with a (good) chippie, butchers, newsagent, Spa store, Post office and Indian takeaway. Thanks to all the goodies outside these all blend into one which could be costly if you need cash - the Spa has a cashpoint which will charge a fee whereas the Post Office will let you have money free if you can find the counter (it's at the back of the shop around a corner). 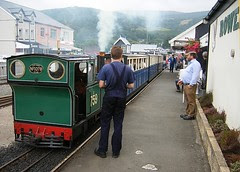 The railway is appropriately enough a miniature tourist line. Born in 1916 (ignoring the 2ft horse tramway that preceded it) and originally 15 inch gauge it still fulfills its original purpose of taking holidaymakers to Penrhyn Point where a ferry will carry them on to Barmouth. Not many lines can claim to be doing the same thing all of their life, and presumably doing it well as it's still there.

In 1986 after a chequered history financially the railway was sold and re-gauged by its new owner. I suspect this is unique among railway lines - are there any others that have been completely re-laid just to bring the rails closer together ? Of course this means the original locomotives have long since been sold or scrapped but the new(ish) ones are a great selection of scaled down replicas based on other lines motive power.

I struck lucky as it was a special "Little to Large" event - which has nothing to do with the unfunny 1970's comedians - but is all about different sized steam engines running. So we had 12 1/4 on the main line, 5 inch on a secondary line along the platform and 45mm on the garden railway I'll come to later. Every steam engine the line owns was running and pulling reasonably full trains as well. An added attraction on the platform were displays of model engineering with little static engines and a second hand bookseller. Finally a miniature traction engine offered rides to the front.

All the usual preserved railway features are found - a gift shop, museum showing the history of the line and cafe. For some reason the later smelt funny (to me anyway) so I didn't bother trying it out. However in the next building is a nature centre, not something 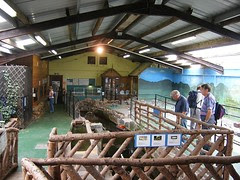 usually associated with railways. Originally built as a butterfly farm this proved uneconomic so it now houses a very small collection of animals - ferrets (smelly), chipmunks (cute and lively), tropical fish (wet), lobster (hiding under a rock) a gecko(asleep) and chameleon (posing). Down the centre is a long pond with coi carp (I think, not good on fish) surrounded by an extensive G scale railway. A couple of steam engines were getting a workout on its 40ft run and a small but appreciative group were chatting to the modellers running the trains. At the far end of the building is housing for owls although there were no sign of these while I was there.

Now the rucksack issues worked against any chance I had of a ride here - those coaches aren't exactly big you know. The front wasn't a long walk away though and you can follow the line - or just point at the sea and stop when you get wet feet. The beech isn't sandcastle friendly being all pebbly. Maybe there is sand under the sea but the tide was in so I missed it. A single seaside emporium lives next to it and serves hot food (hmmm), ice cream (too much ice in the Mr Whippy), souvenirs, arcade machines, trampolines, kids self drive forklift trucks and crazy golf. The view is nice though.

Back at the railway I chatted to the guy in the ticket office during a lull in trade. Apparently the line is popular with staff from other local preserved railways who enjoy coming for a drive. Apparently the Ffestiniog staff enjoy the rest compared to shoveling coal into their own engines. Mind you they do go further and faster. Which brought up an interesting new problem - preserved railways usually operate with a speed limit of 25mph. Until recently this wasn't often checked unless the locomotive was fitted with a speedometer, not always the case with steam engines. Nowadays the passengers often know how fast they are going thanks to portable GPS units and those in the know will check. Apparently several drivers on different lines have been told to be careful...

Fairbourne was everything I expected - it's the sort of place every child should be brought for a holiday. There's not a whole lot to do except have a ride on the train and mess around on the beech but that's the point. You can't spend the day shelling out for entertainment and rides. It's not a shopping experience. Perhaps it's all a bit old fashioned but what's wrong with that ?

More pictures on Flickr
Posted by Phil Parker at 03:46