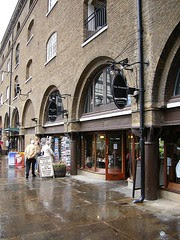 Good grub in London ? You want some of those jellied eels guv'nor.

No I don't. No really. The day I feel like eating a pot full of iced slime will be many days since I will last had solids. How hungry do you have to be to eat those ? I know eels are cheap and nutritious but I'm thinking roast rat might be tastier.

Fortunatly, neither roast rat or icy slime were on the menu at the Riverside on St Katherines Dock. Instead I plumped for the fish'n'chips. Plumped turned out to be a good description for the feast served up. Not just the fish, and chips but a generous salad as well. Good grief, that makes it a healthy meal !

Normally you can tell how good a London eatery is by the number of fluorescent jackets inside (more=better) but there were none to be seen. A good number of suits were eating with me though so despite the location right in the heart of tourist land, a few minutes walk from Tower Bridge, this was a proper cafe doing real food for real people. I hesitate to go on an "eat where the locals eat" riff but it's not a bad idea sometimes. 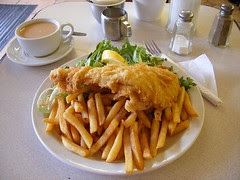 The guys on the next table were engaged in an earnest and loud discussion about computer networking. The merits of different types of security protocols and the idiots who decide what is appropriate were considered at length. One also decided he wanted to whinge about the tea (white floaty milk bits) and chips (to many. Not "right" - he was an idiot, they were lovely). If it hadn't been raining I'd have left as soon as I'd eaten rather than listen to the ins and outs of connection speeds.

The rain was coming down - there was more water in the sky than in the dock - so I felt forced to stop for desert. My waiter said the chocolate fudge cake could be made to come with cream at my request and it did. The art created with a squirty cream can rivalled that seen in the better galleries. It tasted good too.

All this (fish, chips, salad, tea, can of coke, pudding) for 11 quid. In London, according to Lonely Planet, that is as budget as you get. Bargain.
Posted by Phil Parker at 10:43