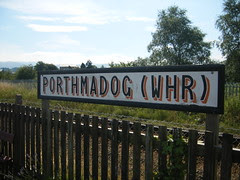 It's confusing having two welsh Highland Railways to choose from. To make it easier to differentiate between them, image the organisations in terms of supermarkets. The WHR I travelled on yesterday - WHR(Caenarfon) is Tesco. You get a big store with lots of stuff but it's all a bit impersonal. On the other hand you have the WHR(Porthmadog) which is like your local corner shop. They don't have a huge choice but there is enough and at least the shopkeeper knows your name and you get to have a chat so you forgive any deficiencies.

You enter the station via the shop. It's one of the better shops I've seen for both the casual tourist and the keen enthusiast. The former finds lots of souvenirs, mostly but not all with a railway bent, the later gets one of the best bookshops in the country. The guys behind the counter are chatty and keen to tell you about both the current state and the future plans for the railway. As volunteers they bring an almost childlike enthusiasm to the job - something no amount of money or bullying can get for a commercial operation. 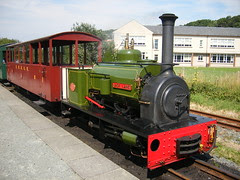 On the platform the train awaits. The big surprise is that there is a locomotive steaming away on each end. Three wooden coaches of different designs make up the train. With the weather holding I went for the one with least glass. If you are looking forward to some upholstery then you'll be disappointed - wooden benches are the order of the day.

The ride doesn't last very long. Even at the walking pace the train travels at it's hardly 15 minutes. At the end we can see where the extension is to be. Two diggers are burying what looks like a big pipe for a tunnel. What you get though is nice scenery, not spectacular but pretty and a travel experience that might be described as "lo-fi". A bit ramshackle, perhaps even amateurish but in a good way. Think Titfield Thunderbolt and you have the right idea.

The two locos are needed as there is no way for one to run around the train and since pushing passengers isn't allowed, the second steam engine takes the strain on the return leg. This makes a stop at the engine sheds where everyone disembarks for a stroll around. Various rolling stock is on display including items under restoration. Some nice displays such as a sectioned boiler help to explain what is going on. The giant lathe in the middle of the shed shows this isn't just men playing with big toys either. For the kids there is even an extensive miniature railway in case they haven't had enough train travel. 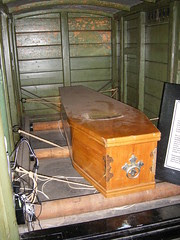 Amongst loads of good stuff, the highlight for me was the hearse van. A Ffestiniog railway carriage which had been converted to carry coffins. Apparently it still sees use transporting the ashes of those who want to make their last trip by train...

Back on the train and everyone is returned to Porthmadog station. The whole thing takes just over the hour depending on how quickly people can be herded back out of the sheds. One parent in my coach was explaining how nice this was - the children's attention span is streatched on longer journeys, something other lines might like to note. When the full 40 mile line is ready for use, how many people really want to sit on a wooden seat for the whole trip at 15mph ? 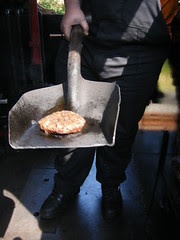 Back on the station, both drivers were happy to chat about their engines. One even took the time to demonstrate his cooking abilities on the footplate, although Gordon Ramsey needn't worry just yet.

I'll look forward to the day next year (hopefully) when the line is complete. It's going to form a nice aside to the serious transport system being built. Best of all it won
't be subsumed into the larger whole but retain an atmosphere all of it's own.

More photos on Flickr
Posted by Phil Parker at 09:37

For the history see: