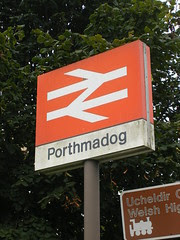 You gotta love brummies. As I swung my rucksack into the seat on my train to Birmingham, an old dear had helped herself to my newspaper which had just dropped on the table. Her reactions were those of a ninja - up from her seat, along to mine and whipping away the news in the time it took my luggage to travel from my shoulder to a seat. "Help yourself" I said with as much irony as my voice could muster. "Oh, was it yours ?" she asked while returning my property. OK so it was a free paper and I firmly believe in these being read as widely as possible but generally snatching them away from a reader is considered bad form. Happily the table also supported an unwanted copy of the Sun which was soon being consumed - comments such as "Not that Amy Winehouse AGAIN" indicated the entertainment section had been reached...

However, paper stealing midlanders aside, the journey to Porthmadog was fantastic. This trip all came about after my visit to Aberystwyth a few months ago. At Dovey junction I realised that I really needed to take the other branch on the line up the Cambrian Coast Railway. This is often described as one of the most scenic railway lines in the UK. I might dispute that after my recent experiences in Scotland, but it'[s a close run thing.

Making the journey is fiddly. My 10 pound ticket from Brum just said to catch the 10:33 and it will do the job. Neither the light up board at the station or printed timetable mention the change at Machynlleth. The train was very crowded so the soft voiced announcer wasn't going to be heard as we travelled either. Fortunately the ticket collector made sure everyone knew what to do and where to go. 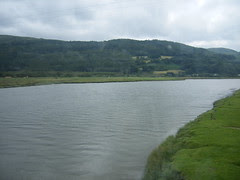 The scenery IS fantastic. The line follows the coast as it weaves around. The train passes remote beaches and inlets. We often traveled over long, low viaducts bridging wide rivers or inlets. I'd love to be able to show you some beautiful photographs but the windows were mucky (Note to Arriva - if you want to sell this as a tourist experience then do some cleaning so we can see out properly) and a camera pointing out from a moving vehicle really can't do the sights justice. On the land side we had mountains with the tops poking into the low cloud. The land is lush and green with forests everywhere.

However, aside from the hills and valleys and crinkly coast, there is one feature that stands out more than any other - the static caravan. You don't see the odd one, or even the odd site. There are thousands of them. Many sites cover acres of the countryside. Entire hills swarm with tin boxes for holidaymakers. Admittedly they are normally painted a tastefull shade of green, the contrast with all the traditional stone built houses is huge.

For the visitor who wants to see Wales, a travelcard for the Cambrian Coast line would be a boon. Every few minutes we passed through a small fishing port now making it's living through tourism. Barmouth, Tywyn and Fairbourne to list just a few tempting destinations. Sadly the service runs in frequently, every 2 hours during the day so You'll want to get plenty out of each stop.

Porthmadog is one of these modest but interesting towns. The traveller has a choice of three 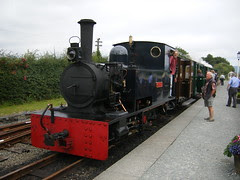 stations to chose from. First there is the mainline railway one you arrive at. The station building is now a pub which does nice beer but inexplicably no food. On the other side of the road is the Welsh Highland Railway which greeted me with a steam engine and some very friendly staff who are happy for the casual visitor to wander on to the platform for a quick look. At the other end of the town is the southern terminus of the Ffestiniog railway which will occupy this blog in a few days.

Walking through the town doesn't take long. Apart from Woolworths there are no serious chain shops. Not too many tacky gift shops either for a place that obviously benefits from the tourist trade in a big way. Mind you, quite a lot of them will sell you a bucket and spade...

I'm staying in the Tudor Lodge Hotel. It's central, clean, comfortable and reasonably priced. The breakfast is continental which is good for my waistline at least.
Posted by Phil Parker at 13:46