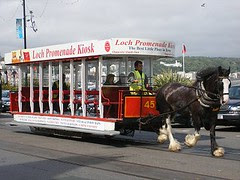 There aren't many places on the Isle of Man that can't be reached by public transport. For me it's one of the joys of the place that you don't really need a car to get around. On the mainland you count yourself lucky if the bus can get you into the town centre or to work, here you take a tram to the top of the mountain !

Obviously this isn't a direct service from Douglas. That would be no fun at all. First up is a trip along the front. This might be a mere couple of miles of nice flat walk but why wear your boots out when there is a handy and regular horse tram service ? The beast pulling my tram is called Charles and he seemed happy (ears up) as he hauled us along in the sunshine. All the horses on the service are in excellent condition as you'd expect for animals on public show. Each horse only works 4 trips, walks on what appears to be special tarmac and is regularly checked over. The trams might look heavy but you can push them yourself and on a nice smooth steel rail one the vehicle is rolling it doesn't take much to keep it that way.

At the horse tram terminus while Charles enjoyed a drink, I transferred to a tram on the Manx Electric Railway. At over 100 years old this is one of the earliest electric railways in the world and still uses a couple of the original cars. These days we forget how revolutionary electricity is but for the Victorians it was akin to magic and as revolutionary as teh Interweb. They liked to show of technology too hence the overhead wires over a line that would normally have been built for steam engines. Travellers to the island would have treated the trip in the MER as a highlight of their holiday in the same way we'd think of a space shuttle launch.

While we waited to start off one woman “entertained” us by whinging about the horse trams as one of them hadn't been offered a bucket of water at the end of his trip. And the fact the driver had got himself and the ticket collector a coffee. She was going to get off and say something to them. But she didn't.

The repertoire expanded with new moans about the ride comfort, noise and a hundred other niggles but no-one else cared as the view along the line is fantastic. OK, so you aren't revelling in modern air conditioned comfort, although the trailer car was a side-free toastrack type for those who needed the cobwebs blowing away, but that's part of the charm. It's all about the journey and not just the destination. We were treated to a procession of Manx countryside and seashore with the water glinting in the sunshine. Finally though the tram arrived at Laxey.

Laxey station has always looked exotic to me. The station buildings themselves sit in a wooded hollow and a lot of the smaller trees are palms. Architecturally it owes a lot to desert island style shacks with it's wide verandah and a couple of “mud hut” style outbuildings. I've spent happy times just sitting here and watching the trams roll by in the sunshine, but not today - a few feet away were the trams that go up the mountain. 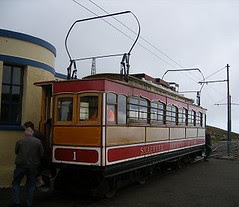 For the technically inclined there are important differences between a Manx electric tram and a Sanefell one. The later runs on track six inches wider for improved stability in the wind and also to incorporate an extra rail fitted in the middle on its side. This Fell Rail is an extra braking system in case the main brakes fail on the mountain. Special grippers are fitted under the car and a driver of a failed vehicle can use these to control its decent to return to the station. The mountain cars also use bow collectors rather than trolley poles to ensure a constant supply of electricity all the way, especially in high winds.

A handy hint for travellers is on the trip up, sit on the right hand side of the car. That way you are treated to the best view of the one of the islands best known landmarks, the Lady Isobella water wheel as the tram climbs out of the station and up the Laxey valley. If you don't, it looks like this. New this year is a running commentary from the driver pointing out some of the sights you might otherwise miss. With several of these being ruins that appear to the uninitiated to be little more than piles of rubble, it's a valuable service. Trams up the mountain run next to the edge so vertigo suffers might care to disregard my advice on seating position and hide as far from the drop as a 10 foot wide carriage allows.

At the top of the mountain passes through the Bungalow. Beloved of motorcycle enthusiasts it's the point where the tram tracks cross the mountain section of the course. During the race trams stop here and passengers have to cross by footbridge to another tram waiting to complete the journey. Apparently getting the riders to dodge the trams was considered a challenge too far !
Past Bungalow the line spirals up to the summit. At this point everyone sat on the “wrong” side has the best view. Ireland, Scotland and Wales hove into view at different stages along with the flatlands at the north of the island.

Finally after half an hours travelling the tram arrives at the top. If you are lucky you are able to see the café 5 feet away. The summit is at 2038 feet above sea level and disappearing into cloud is a regular occurance. At that point your options are to sit it out and eat some excellent cake or stay on the tram and head back down. Hoping for the best is usually worth it as the wind moves the cloud around and creates gaps so at least some of the view can be enjoyed.

As it happens I got lucky – the wind may have been gale force but that mean the view was present. Nothing is perfect of course – the kingdoms of England and Ireland were hidden from sight but the others promised, Wales, Scotland (just), Man, Heaven and Neptune were there to be seen if you squinted hard enough. Holding a camera was another matter and I'm not sure how good my pictures will be !
Posted by Phil Parker at 21:10