Ferry down the Mersey 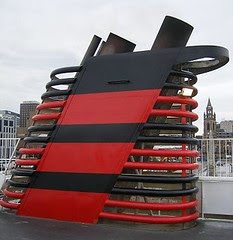 At what point is it reasonable to storm the bridge of a ferry and take control ?

I ask because I'm pretty certain that the captain of the good ship Viking that took me to the Isle of Man today, was a fake. When he made his first announcement to the passengers he said that there would be some swell as we approached the island, "hitting the left of the ship.". Now as any fule know, the correct term is "port side" and if he can't get this right, how could we trust him with the steering, mainbrace splicing and other nautical tasks ?

Sadly, none of the other people on board seemed up for a mutiny so I just make careful note of the location of lifeboats and hoped for the best. It seems that the choice of 2 cafes, a bar, shop and Mr Bean on continuous loop pacified them.

Half an hour of interesting Mersey and 2 and half hours of dull, grey Irish sea later we made land. As our main in the gold braid had promised, the trip got a bit lumpy in the last hour. Inside I felt a touch uneasy but a trip up on deck cleared this - and thanks to the wind, pretty much everything else !

With the on board shop out of Guardians I bought a local paper, The Isle of Man Examiner. The thing that struck me most was the numbers convicted of various levels 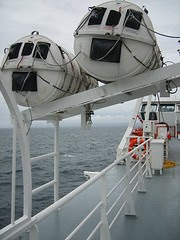 of drink driving. Not sure if this is a one-off post TT even or if I need to be careful on the roads about closing time. My favorite story though concerns a plan for more car parking in Peel. This will involve blasting away some of the cliffs and local residents have been interviewed by the reporter to garner their views. Most are happy with the idea but the best quote comes from Neil Richmond who is secretary of Peel Golf Club, "I go for walks around the back of the castle and I know there's a lot of late-night socialising that goes on around there, which would be encouraged by making this secluded car park bigger."

Back on dry land I'm booked in to the excellent Arrandale Hotel which provides comfy, reasonably priced rooms, a working radio and telly, and free WiFi - even a sea view if I crane my neck out of the window a bit. What more can I want ?

More pictures on Flickr
Posted by Phil Parker at 13:10