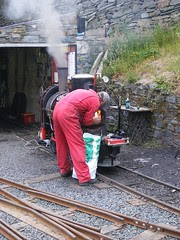 Laxey isn't home to just one giant waterwheel, it actually has two. In the gardens at the centre of the town a smaller wheel has been erected. Smaller is a relative term as it's still around 30 feet in the diameter so pretty impressive. When I first saw this under construction a couple of years ago I thought it was an odd move - surely they didn't need this miniature impostor when the real thing was a few minutes walk away ?

As it turns out the "small" wheel has history. It started life at the top of the valley powering stone crushing equipment. When this was no longer required the wheel moved around, ending up in a museum in Wales where it was discovered half-buried and repatriated. Now restored it forms the centrepiece of the gardens that great visitors to Laxey.

Of course one new attraction is fine, but two is better. Joining the two wheels is the Laxey Mines Railway. This is a completely new line built over the last 5 years. Two identical locomotives run it with a couple of coaches and demonstration train of iron tub wagons. The locos are replicas of Lewin built, Ant and Bee, which used to pull the ore trains into the mine workings. Nowadays they provide a fun ride a quarter of a mile up the valley to the main wheel.

When I arrived it was raining yet the volunteers running the line were cheery and friendly. Considering the weather forecast for the rest of the day this was good going and probably the sort of thing you can only sustain while wearing a bright orange pair of overalls. New for this year is a station around a sharp curve from the tunnel entrance but in the rain trains were leaving from outside the engine shed so the passengers could shelter.

The ride takes a few minutes and thanks to the rain, not many got off to continue on foot to Lady Isabella. There was a slight delay on the return as the driver had to remove his waterproof overtrousers - they might keep the weather off but at the price of roasting his legs in the tunnel !

Back at the start I managed to get a quick guided tour of Bee which was in bits for boiler testing. Apparently even though the locomotives are new, the construction wasn't of the highest quality. Ant has already been rebuilt and Bee is due for the same expensive treatment soon. We chatted technical for a while and I now know far more about these odd little engines, and have some unusual photos as a result.

This isn't a serious ride but what makes it is the sense of fun you get from the people running things - they really care about their little line. It's not just a railway enthusiast thing either. They care about entertaining the punters. On fathers day, Dads and Grandads get a free ride. Halloween sees the tunnel turned into a ghost train. Yes it's a railway which represents some important history in the Laxey valley but it's far more fun than that. 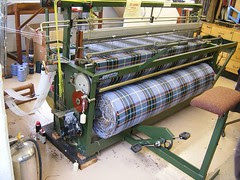 If you don't fancy steam heritage then a five minute walk away there is a the Laxey Woolen Mill. There real Manx wool products are made in a semi-traditional way. To me a jumper is a jumper but the loom was something else. It was set up to weave a traditional Manx tartan and uses a Jacquard style paper tape to set the threads for each pass of the shuttle. Power comes from a set of bicycle pedals so it's very "green" !

See a video of the loom here.

I found you on YouTube and followed the link to your blog. I am amazed to see how Harris Tweed in woven by different weavers. It is such an incredible textile. I recently started importing it from a lovely shop located on the Isle of Harris. I make handbags. Thanks for your feature.