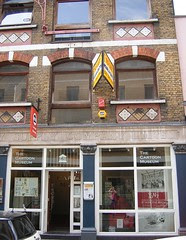 London is full of odd-ball attractions. If you fancy museums of fans, tea or spectacles you're in luck. While I love a good cuppa and have worn glasses for years, I tried the Cartoon Museum in Little Russell Street instead. It's just around the corner from the slightly better know British Museum but as I'm not as big a fan of stolen marble as I am of speech bubbles, cartoons it was.

The building is unprepossessing tucked in amongst the special London mix of posh eateries and tacky gift shops. A street sign outside announces its presence and to be honest I stumbled it this by accident. Entry is a reasonable £4 which gives you access to whatever is on as the special exhibition plus the usual fare covering the history of cartoons and many original copies of classic British strips.

The special was an exhibition of the cartoonist Pont. No, I'd never heard of him either but that's not always a bad thing. Pont (real name, Graham Laidler) wryly observed the British character and committed these to paper. Mainly published in Punch before, and just into WW2 his drawings are still amusing today. Well they made me laugh anyway. It's difficult to describe the cartoons but one that sticks in my mind is titled the – The British, Like to fit in when traveling abroad – with a picture of a couple of tents in a jungle and the intrepid explorers sitting around the table in full evening dress.

Not having heard of Pont before I wasa tad worried how heavy this would be. This history section of the main gallery covers people like Hogarth who may have been devastating in their day, now mean nothing to anyone other than cartoon officiaonardos. One snippet I picked up from this part of the display that appealed was that in the early days of print, books were so expensive that publishers would hire out a folio for “an evenings entertainment”. I can imagine the volume being brought home with the same sort of excitement a new DVD is now, The whole family would settle down for a good read and laugh about the failings of the great and good. 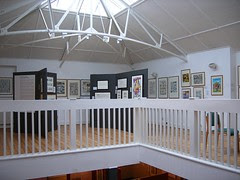 Upstairs the visitor is treated to a display of original cartoons from many famous cartoonists and comics. These tend to date from pre-computer days and I was fascinated to see how many parts of the page are stuck in place using copied parts. I suppose it makes sense that the artist doing the cover of 2000AD doesn't have to draw the title every time. Quite a lot of Tippex and general tidying up showed too. I suppose this all disappeared at the printers and it's interesting to see. I'll be honest – seeing the words “digital print” against a item made me think they'd simply photocopied a page. I want ink and paper and watercolour paint not inkjet printers !

My visit lasted a couple of hours at most and much of this time was spent chortling and enjoying the subject matter. If I have a complaint it would be the souvenir shop. I wanted copies of some of the Pont cartoons, ideally as postcards. Sadly all that was available were prints at £28 a throw or the £11 programme. The later was good value being a fat volume with life history and lots of illustration but you can't really post bits to people who would appreciate them.

Visit the Cartoon Museum Website
Posted by Phil Parker at 18:38