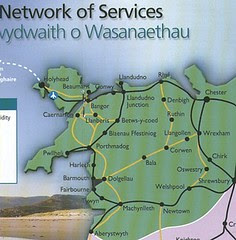 welsh map
Originally uploaded by Phil_Parker
I'm trying to book a trip around Wales. It's going to be a bit anoraky as I want to travel on several narrow gauge railways. The plan involves a round Wales train ticket - or at least that was the plan.

If you look at the map that I've stolen from the official Arriva trains leaflet. As you can see there is a black line between Porthmadog and Llandudno. According to the key, black lines mean railway lines.

Not according to any automated train timetable system it doesn't. Nor according to the National Rail Enquiries telephone helpline. There is no railway here. Which of course makes the concept of a round Wales rail ticket a bit pointless.

What worries me is, how did they get it so wrong ? Interestingly, if you look at this map (warning, whopper PDF), the line isn't mentioned.
Posted by Phil Parker at 08:58