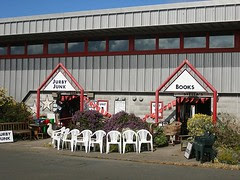 Oh well, might as well start the trip with a visit to one of the lesser attractions on the Isle of Man - Jurby Junk shop. As you would expect from the name, it's a shop and it sells junk. What you don't realise until you find it is the sheer scale of the operation.

Housed in a couple of industrial units on Jurby airfield the business has been run by Stella for at least 30 years. As well as providing all the old tat that anyone on a small island could want she also supplies props for film and television work. I suspect that this provides most of the money as I've never seen the junk sell in any quantity. This is stacked high, and I mean well over 10 feet high, on shelves with very little semblance of order. Some items are grouped into boxes under the racking but most simply exist on shelves.

Most people find that their homes acquire a level of detritus that appears to multiply of its own accord. The junk here seems to be doing the same thing. Much has been in stock for several years and the old place has a faint smell of "old stuff". How much will ever find a buyer is open to conjecture. It's certainly fun to root around it though.

The business has been expanded in the last 18 months to take in books in an adjacent unit. Imaging taking several thousand books of all genres and tipping them into a room - and you have a pretty good idea what the place looks like. You'll not find much in the way of categorisation or organisation on the shelves. Paperbacks fill baskets on the floor and the only way you find anything is by treating the store as a giant lucky dip. To be honest with airport books that's good enough but looking around there are going to be some real nuggets of gold to be pan handled from this lot - you better have plenty of time though ! 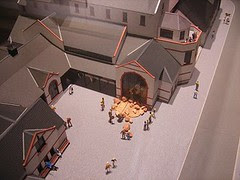 As a counterpoint some culture was required. That, and the rain has arrived big time so the Manx Museum in Peel seems awfully attractive.

On arrival a school party was just leaving - great news as it's too good a place to waste on kids. The first area covered is the Pagan and Viking heritage of the island. Shown through a mix of reconstructions and audio visual displays. One minute you are in a Celtic house and next in its Viking replacement. Every step is illustrated by the actor T.P.McKenna pretending to be a mysterious Manx spirit. To be honest this was a bit duff with to much mysticism and not enough hard facts for me but at least I now have a better understanding of Paganism and the carved crosses that adorn many Manx churches. The transition to Christianity and the implications of this change is well covered though. Nice use of "Odins Raven", a cut down replica longboat built in the 70's, too.

Things improve as you move up stairs. The floor is transformed into a quayside chandlers with hundreds of objects decorating the "set". Looking through the windows you spy the boats and dockside characters. There is noise and smells and nothing mystical at all. No labels either which will make it harder for many to understand what they are seeing. More AV displays tell the stories of Manx characters from the man who invented lifeboats, a member of the Bounty's crew, a smuggler and the wife of a sea captains. This last character is particularly interesting as she and her family travelled the world in an era when most Manx barely travelled between their villages on this tiny isle.

The museum design was excellent - as long as hardly any people turned up. The displays worked fine for groups to 3 or 4 at a time - any more and you came to a presentation half way through and had to watch things out of order. Worse, some rooms simply couldn't accommodate many so on a busy day you'd have to wait around or simply miss chunks for the display which would be a great shame.

Following on the from the maritime characters we had displays of kippers and fishing followed by the history of the Steam Packet company.

Aside from the design issues, the biggest problem with this museum is that is is so good. After 3 hours we were being checked out as closing time approached. The Peel gallery received on the most cursory look, yet deserved much more. Maybe the designer modelled themselves on PT Barnum and wanted us to left wanting more !

More pictures of junk (and other stuff) on Flickr.