The weatherman said it was going to be wet. Very wet. Very, very wet, all down the centre of the country. So I decided to head west to Hereford. It's a nice journey with plenty of time to read a book and that's what I was in the mood for.

Conveniently the trip can be broken up so there is the chance to mooch around three different places in a day. First up is Birmingham where the shopper is presented with the chance to stock their wardrobe with the products of a hundred sweat shops - not ethical, but cheap. To be fair if the first train had arrived five minutes earlier I wouldn't have had the time to kill. As it was after asking the helpful Virgin Trains employee on the concourse, tried the travel centre (too busy but with only 4 customers) and then the Customer Reception I realised that my next train ran in about 2 hours. Fortunately as a service to Worcester left in 45 minutes there wasn't too long to wait.

The train leaves the city following one of the many canals (more than Venice TM) and past the university with it's bizarre central clock spire. I'd have been interested to go to the meeting that discussed that, "We need to put a pointy tower in the middle of the campus with a clock on it in case the students can't remember to wear a watch.". Canals used to be seen as liabilities with adjoining buildings facing away from the water. This has changed, now the houses along this stretch had all built their gardens down to the back with various decking arrangements so the occupants can sip their drinks watching the boats sail by.

On arrival at the station I managed to remember (for a change) to check the time of my next connection. I'm not sure who is running the Travel Centre there but I assume they won't be remaining in post for much longer. For some reason they seem to think that their job is to encourage rail travel. The place is stacked out with leaflets that I'd not seen before - Cornish rail based real ale trails, wildlife watching by train, touring Wales - what is going on ? How come none of this stuff is stocked in the much larger Birmingham centre ?

Worcester is a lovely city with loads of little side roads to explore. The small shop hasn't 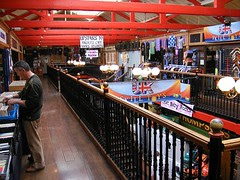 been banished, even if they aren't found on the main shopping drag. Fans of the indoor market will be please to find a small one with 2 floors. Downstairs you buy cheese and large electrical items, upstairs second hand books, records, juggling equipment and clothes for Goths (What, nothing in pastel shades ?) - nice mix. I tripped over a couple of model shops and a really excellent old fashioned sweet shop. Why is it that buying sweets from jars is fun ? And how come these places didn't all die off when they had to start selling 100g instead of "a quarter" as the anti-metric brigade told us they would ?

My packet of mis-shapes stayed firmly shut for nearly an hour. Then on the train for the next leg I realised that on a hot day the unwrapped chocolates needed to regularly sampled for quality purposes. My initial experiments were satisfactory but you can't be too careful and the experiment was repeated as required. It's this sort of commitment that has made British science what it is today.

Hereford arrived after more lush green rolling hills. The size of the station gives a good indication of the cities importance locally. Once there, was a very imposing goods shed, which has now been turned into a ten pin bowling centre. At least this means that have to look after the fabric of the building which is in reasonable condition.

The station is on the edge of the city and you have to cut through a supermarket car park and walk for five minutes to get there. I'll be honest and say this isn't my first visit but after paying a visit to the excellent model shop and a brief wander in the shopping centre I've usually headed back. This time I had the luxury of proper exploring time which was handy as it's a bit of a maze.

market. The entrance to the Buttermarket is impressive but leads on to a bit of a corridor. This opens out to a proper halls stalls that get extra points for looking like that have been open since the 50's. OK so there is a mobile phone seller but its mainly people whose stand can be best described as "indeterminate" with a few electrical bits, some haberdashery, gifts, bit of stationery etc. All good stuff to the connoisseur. The cafe wasn't properly greasy spoon perhaps but not bad.

More by luck than judgement I found myself at the Cathedral - and realised why its famous. Back in the 1980's the people in charge decided that to raise funds (don't say publicity stunt) they would sell the Mappa Mundi. Of course there was an outcry as Johnny Foreigner might get his filthy hands on one of the country's greatest treasures apparently. Cash was found and the map was "saved". I'd taken little notice of this at the time but since I was there it seemed churlish not to go and see the thing. To be honest had it not been combined with the chained library the £4.50 admission charge might have put me off...

Having parted with my cash I read every bit of the display that covers the two attractions. To be fair there has been a lot of effort put in with translations of the map and explanations of why it matters and how it was created. The library gets similar treatment and you even see a couple of book cases with the contents chained up. All of this means that once you get to the end of the museum and see the real thing, it's a bit of an anticlimax.

When I saw the map the first thing it brought to mid was the Mona Lisa. Both are a lot more brown than you would expect, the later because it's displayed behind the lens from a pair of sunglasses to stop the Americans photographing it, the former because goats skin is not the best material for maps. The room the map is housed in is dark for obvious reasons and the map only dimly lit but you can tell it is old well away from sparkling condition. Without the previous explanations the document would make no sense at all. Even with them I can't help feeling that it's main claim to fame is not having been thrown away rather than the content. I'd stick to Ordinance Survey if I wanted to navigate.

The library is worse though. Having seen a couple of shelves all you get is a few rows of the same. The room they are housed in is made of stone but modern stone. Crucially, for me at least, any atmosphere and context has been wrenched away by the decision to move them from the room they were intended to be in.

The cathedral itself is very impressive. Like most is is overly ornate and the stained glass is fabulous. Even the floor is worth a look and uses early swastikas in some places - a reminder that the symbol was appropriated rather than designed. In fact I think the floor was more interesting that the vaulted ceiling, a reversal of the norm for religious buildings. Perhaps the good people of Hereford spent more time looking down than up ? 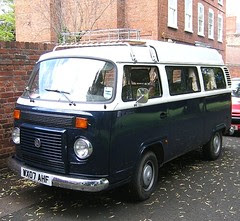 Back outside I found the best thing about Hereford Cathedral - the ice cream stand. The 99 is large and comes with the best raspberry sauce I've ever had. It's so tangy and flavoursome that there have clearly been no raspberries involved in the production. And while I chomped and slurped the was entertainment watching the stone masons carving. I'm assuming that they are a permanent team on the job as the rate you can carve stone must be slower than the weather can erode it. I was also pleased to see a modern Type 2 van. The radiator for the evil water-cooled engine doesn't do the looks any favours but I suppose that is progress for you. Nice van otherwise, I wouldn't mind the drivers seats for mine.

More pictures on Flickr
Posted by Phil Parker at 10:34