The Laxey Wheel is one of those iconic tourist attractions that can turn out to be a bit rubbish when you finally visit them. I'll admit to not being that bothered about it on any previous trips to the Isle of Man. On my first time on the island I'd wandered in and taken a look, even going so far as to climb to the axle level before bottling out. From a distance the wheel is very impressive – at 77 feet in diameter and painted red to stand out from the white brickwork it could hardly fail to be. Perhaps the slightly “twee” painting didn't do anything for me, I like my industrial plant to be grubby and used, not chocolate box pretty.

It was a nice day and I was in Laxey so I fancied another go. The memory of stopping half way up the climb niggled me and I felt there was unfinished business. It was the same with the Eiffel Tower – reached the second level on a school trip at 12 but for the next 15 years wanted to go back and make it to the top.

To reach the wheel you have to climb up the valley from the station. This makes a large structure even more imposing and it certainly looks bigger than you expect having viewed it from a distance. It's original purpose was to power the pumps keeping the lead mines dry. Man has no coal deposits but an abundance of water (quite an abundance as I write...) so hyro-power makes good economic sense and explains why the Manx kept on developing it when the mainland had moved overs to Mr Newcomons invention. The mines were up to 2000 feet deep at one point so needed a lot of pumping.

The pumps are driven by a long crank rod that moved around 10 feet every time the wheel revolves. This, more than the wheel, fascinated me when I first saw it. The huge square wooden rod is carried on a long viaduct and terminates on a T-rocker where it would have been attached to the pump. 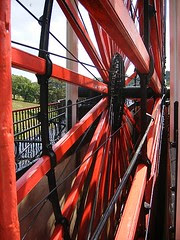 All journeys start with a single step and heading up the wheel is the same. The first steps are reasonably easy and straight. They take you to a balcony level with the central axle. This is where I made my mistake on the first visit, I watched the wheel. It is mesmerising as it rotates at around 3 rpm but it also fills your field of vision. I can't claim to be good with heights but buildings aren't usually too bad for me. When most of the building is rotating – then I get the willies. This time I ignored the wheel.

The next steps are a spiral staircase around the tower carrying water to the top of the wheel. They aren't wide but there is a handrail to seperate you from death. This was fine for the first rotation but at the start of the second the designer ended up with the a beam bisecting the airspace you need for your head. Short people will be fine. Some of us have to read the sign and duck down to squeeze under. Many people stop at this point but sheer bloody-mindedness made me press on for another rotation up to the top.

The balcony at the top is lovely. Solid, not shaky and wide enough to walk down the centre without touching the handrails. I know you'd expect anyone with vertigo to hang on to the rails for grim death but that meant going near the edge and I preferred not to. I also preferred to ignore that bit of my brain that way telling me that I was walking on a wooden platform sticking out over the top of the huge wheel. I know there are struts to support this but it is an old building and you can never be too sure how good the maintainance has been. 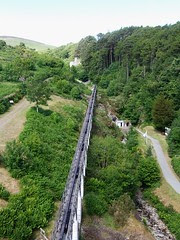 The view from the top is magnificent. Along the valley you see the course of the river that provides the power. Behind there is the crank rod transferring power to the pump. To the left and right, hard surfaces that my vertigious brain said meant death so I didn't look at them much. And below is the noise of rushing water and the wheel rotating. Nice.

You can watch a video of the wheel here.

Going down is harder than going up if you want to do it in a controlled way. That beam half way down the steps had obviously been lowered by some joker while I was up there, or at least that's what it felt like.

Back at the bottom I walked some of the mine trail, at least as far as the T-rocker. It's hard to believe that 100 years ago the verdant land of the valley was basically a factory floor. The plants have replaced dirt and grime from the mine and ore processing activities. The hundreds of men, women and children who worked there are no more. Reading the information boards it it hard for the modern visitor to understand what made people chose to crawl down dark and dangerous mine shafts every day. I might not like a 100 foot climb up the wheel but I'd like a series for 150 foot ladders going down into the dark.

The wheel has a fairly typical story behind it's survival. The Manx have never been that good with heritage despite relying on tourism as the mainstay of the islands economy for many decades. Despite being a major attraction the wheel was allowed to decay until a builder, Edwin Kneale, leased it while the rest of the mine equipment were being sold for scrap. He restored and offered it as a tourst attraction for nearly 30 year before the Manx Government bought it and took over responsibility. Without his actions Lady Isabella would have followed the Lady after whom it is named into the past. People would have said, "How wonderful if the wheel was still ther" but once gone these things don't come back. Amazingly the Government still allows attractions to fall into disrepair. This year most of the Manx Electric railway is out of action for repairs. The tourist board is considering dropping the production of the annual brochure that provides over 50% of the trade for the hotels and guest houses too...

Wikipedia information on the Laxey Wheel
Photos in Flickr
Posted by Phil Parker at 08:34