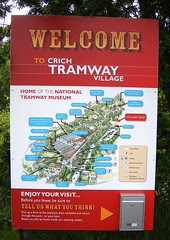 Tramathon for the uninitiated is an annual event that takes place at the Crich Tramway museum, Derbyshire. During the day, an attempt is made to run every single working tramcar at some time. This year the plan was for 17 different trams to be available. I've not been for a few years so made a determined effort - which paid off with an excellent day.

The drive up wasn't exciting, other than when a family of ducks decided to cross the M1 on foot. The lorry bearing down on them had to take evasive action and fortunately none of the ducks was hurt although it gave them a shock. New time, wait for the family to learn to fly !

I'll spare you a description of the day in preference for a few bullet points. First the bad bits:

Getting in. They've never been good at this and on a hot day keeping everyone waiting in the sun is no fun at all. The problem was that the people on the gate had to get Gift Aid forms completed by everyone paying to go in. This helps the finances but doesn't do anything for the first impressions. A pragmatic car park official let those with members tickets or who had paid in advance through a side gate. What made it worse was the constant moaning of the old women behind us in the queue. Judging by her make-up she'd been up early and probably needed a snooze...

The tea rooms are fantastic. Clean, quick and reasonably priced. And they do fantastic chocolate cake. Decent sized slices too. I could have spent the day there.

Despite the large numbers in the museum, most had vanished onto trams to enjoy their rides. Since this is free all day it keeps most of the family happy.

Riding on trams is great fun even when you've done it before. Every single one is restored to the highest standard and each is different.

The volunteers who run the place really care about it. And it shows. 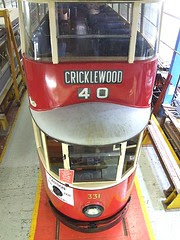 The gallery over the workshops is fascinating. Obviously I like to see things being made but everyone up there seemed to be enjoying themselves. There are some clever displays which explain to non-enthusiasts what all the bits are.

One of the trams I've not ridden on before was Oporto 273. Unusually for Crich this isn't a UK tram which means it has unusual features required for a warm climate. I loved the high domed ceiling, delicate wooden detail and rattan seats. All of this must have made restoration a challenge but the result is fabulous.

At one end of the line is Glory Mine. The site is part quarry and this museum shows some of the old mining equipment. In the corner there is a little wooden hut which, when open, sells rocks and stones. The lady in there is a real gem (pun intended) as she not only knows here geology, she explains it to everyone with the zeal of a true enthusiast. When you show an interest in a piece she'll explain where it came from and what the rock formations are. Prices are stupidly low - I bought a chunk of Barite for £3.50 simply because it looked lovely. Best of all, I know about it, something you don't get in shops. If you like rocks and crystals, this bit is worth the trip on it's own.

The tearooms does a delicious orange cake. And you can sit and watch the trains go by from the window. Yum.