The highlight of any trip to the Isle of Man must be a visit to the Groudle Glen. It is officially the most beautiful place on the planet and worth a few hours of anybodies time.

The weather wasn't kind, with drizzle and high winds (60 mph+, the radio was full of ferry sailing postponements) . The tram I caught had only a single car as the open sided trailer was felt unnecessary. The run was noisy with the windows rattling away as we ran along the cliff edge watching the sea hurling itself at rocks and cliffs. Most of the passengers had the same plan as me and hopped off at Groudle station where a ranch style sign announces the entrance.

It's worth explaining a little history at this point. Groudle Glen hasn't always been a scenic feature. In Victorian times it was more akin to today's theme parks. After paying the entrance fee, the visitor would be entertained by fortune tellers, fairy lights powered by the amazing innovation of electricity, bands playing by the dance floor and finally a small zoo with ferocious animals. There was the largest crevasse in the world and other amazing sights depending on the time of year. All this and the bracing coastal air thus combining entertainment with health outdoor pursuits. Most of this is now long gone but there are still attractions, and no entry fee either !

This isn't a trip to do in high heels. The path down into the Glen is reasonably steep - not difficult but you want shoes or trainers on and if the weather has been inclement (inclement: a day of driving rain) recently they better not be your best shoes or trainers either. This drops you underneath a tall, stone, curving viaduct that carries the Manx Electric railway over the drop. A rushing stream runs under this and down the valley. You can follow this in either direction but most people head toward the sea.
Several things strike you here. First, the colours. Groudle Glen is, in my experience, always green. Ferns and moss cling to the cliff sides. Flowers and shrubs fill the space. It's not garden pretty with lots of showy colours but has more of a jungle pallet.
Next you hears the sounds, or rather the lack of sound. That stream, which runs over numerous small waterfalls is the loudest noise followed by birdsong. If you fancied a bit of meditation I'm sure all that rushing water would be just the thing to help you centre. There isn't a toilet in the glen though so if that's the effect it has you better no listen too hard !
To be honest the pictures give a better impression than words and even they can't give fully convey the wonderful, peaceful atmosphere that comes over you.
Half way along 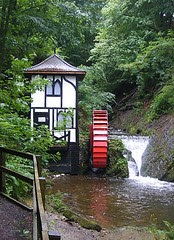 the path is one of the few remnants of the Victorian theme park past - a small building with a bright red waterwheel. Apparently this used to power the fairy lights once upon a time. Nowadays it's the think everyone takes a picture of. Quite how this was moved into position isn't clear as there is no road access. Still, when labour is cheap I suppose anything is possible.
Passing past the bandstand and over a little bridge the path splits. Down takes you to the sea - not a friendly place when I visited. Go up and you reach another Victorian triumph and the jewel of the Glen - the Groudle Glen Railway.
The GGR has a great slogan - the railway that runs uphill to the sea. While accurate a better phrase might be "the railway that runs from the edge of nowhere to the back of beyond.". It is a line that is utterly and beautifully pointless.
The main station is Lhen Coan, a Swiss style structure covering two tracks. As I arrive the coaches are waiting and the locomotives being 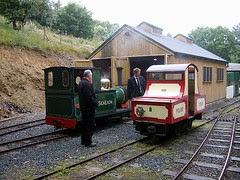 prepared. One of these, Sealion, is the railways original loco and is over 100 years old. Next to it is Polar Bear a replica of one of the battery electric locos built to the replace the steam engines. As it was these wore out and steam took over again !
Polar Bear is sent off to check the track is clear from the previous days storms. I chatted to the guard and was given a brief tour of the engine and carriage sheds. This isn't a privilege normally accorded to visitors as some are stupid and hurt themselves or don't realise that standing in front of a moving train isn't clever. Others are light fingered and will help themselves to anything not nailed down. The Manx people are very friendly and showing interest usually gets volunteers on attractions like this to open up and enjoy showing off what they do.
Inside the engine shed is a new locmotive for the line - a steam engine shaped diesel that is famously shown running on a Butlins railway in the opening credits of the BBC TV show "Hi-De-Hi". Currently under restoration it will give the GGR some quick motive power for quiet days along with another attraction to bring high-spending railway enthusiasts back time and time again.
As train rides go this isn't bad. You start off in forest and climb (yes climb) towards the sea. Greasy wet track and a full train, not bad for 11am on a Sunday morning, gave Sealion problems but one of the team hopped off and spread sand along the rails so we could continue. For a little engine (Most people tower over the trains) it certainly pulls well although we were treated to a good show of smoke and cinders from the chimney.
At Lime Kiln Halt the line curves along the cliff edge and finishes before it runs out of land. This is Sealion rocks, so called because the next stop for the intrepid Victorian would be a stroll down to the Sealion and Polar Bear pools. Some blockwork and part of a bridge still remain from these although the animals left many years ago. For me, the cafe was a more appealing prospect. Hot tea and special cake made from biscuits, marshmallows and choccie goo fortified the inner man for some sea watching. With no mains electricity out on the cliffs, power comes from a very eco-friendly wind turbine which was going great guns and could probably run most of the island at the time.
The train back was much more relaxed if slightly wetter until we reached tree cover. You can watch a short video of the cliff section here. Back at the start there is the obligatory souvenir shop, soon to be replaced with a more impressive emporium. With the line at full length and as much rolling stock as they need, the small team who look after this line and have saved it from vanishing, are concentrating on improving the infrastructure. Good luck to them.
More photos on Flickr
Visit the official Groudle Glen Railway Website
Posted by Phil Parker at 23:44